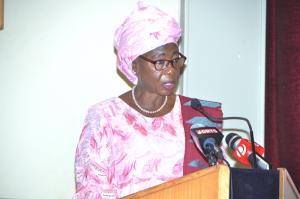 BANJUL, 19 APRIL 2019: H.E. Dr. Isatou Touray, The Vice President of The Republic of The Gambia, officially presided over the signing-in ceremony of the Gambia’s Health Compact.   Attended by government ministries, the United Nations System, diplomatic missions, civil society, and the private sector, this event is one of the Vice President’s important unfinished agenda during her tenure in office as health minister, which ended barely three months ago.

For the health sector, this event constitutes a very significant milestone in the history of health governance in the Gambia as it opens a new page and an opportunity for Government and development partners to work together in a more transparent, coordinated, cohesive and accountable manner in realizing national health and development goals.  In underscoring the importance of the event, H.E. the Vice President and Hon. Dr. Ahmadou Samateh, Minister of Health, both described the Health Compact as an essential tool and resource for accelerating the implementation of the National Development Plan 2018-2021. The NDP 2018-2021 places a high premium on the creation of new or strengthening of existing governance structures and platforms.

What was even more striking in the statements of the two authorities was the fact that both of them emphatically described health as a critical enabler for socio-economic development and passionately called for a radical transformation in the way the health sector conducts its business by proactively engaging key partners within and outside government circles.

The ensuing discussions after the presentations on health systems and compact were also food for thought as stakeholders brought forward issues relating to domestic resource mobilization for the health sector.

For the World Health Organization, the event can be described as a “dream come true” after sustained, protracted efforts in pushing this agenda forward. Indeed, this journey started a long way from the development of the national health policy and strategic plan 2014 -2020 right through to assisting the health sector in coordinating development partners in ensuring that this event takes off the ground as planned. These efforts did not go unnoticed as the Vice President, and the Ministry of Health both described WHO, in their words, as “our chief health adviser and leader in coordinating health development partners.”

The WHO Representative, Dr. Desta Tiruneh, assured the national health authorities that the WHO and the United Nations System will continue to strengthen this partnership in ensuring that the health sector realizes its goals.  Dr. Desta together with the Honorable Minister of Health and his Permanent Secretary also used the opportunity to hold interviews with the local media to shed light on key national, regional and global health issues, particularly on Universal Health Coverage.

The event was preceded by a two-day stakeholder meeting, supported by the WCO, to validate health sector assessment reports.

At the end of the Compact meeting, the following key outcomes were achieved: 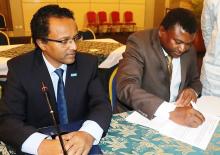