Despite gains in access, 1 in 5 African children go without lifesaving vaccines

Despite gains in access, 1 in 5 African children go without lifesaving vaccines 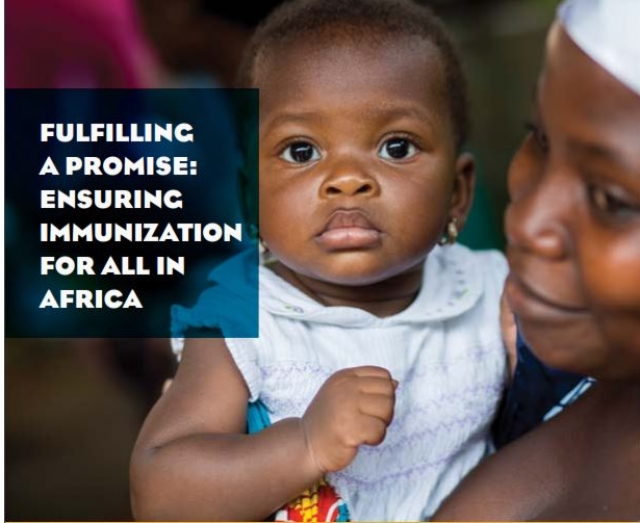 Ahead of first-ever Ministerial Conference on Immunization in Africa, new report highlights progress and challenges toward providing universal access to immunization

Addis Ababa, 23 February 2016 — A new report issued today by the World Health Organization (WHO) Regional Office for Africa and the Eastern Mediterranean Region shows that despite considerable progress in expanding access to vaccines in Africa, one in five children on the continent still do not receive life-saving immunizations. Africa’s routine immunization coverage of 80% is the lowest of any region in the world.

The report is being released ahead of the first-ever Ministerial Conference on Immunization in Africa, being held in Addis Ababa on 24-25 February, which will bring together ministers of health and other line ministers as well as parliamentarians to commit to providing universal access to immunization and strengthening of vaccine delivery systems. Titled Fulfilling a promise: Ensuring immunization for all in Africa, the report is the first to summarize immunization progress and challenges across the continent since global leaders declared the Decade of Vaccines and launched the 2011-2020 Global Vaccine Action Plan (GVAP).

“For Africa to achieve its full potential and secure a bright future, we must unite to ensure that every child on the continent receives the vaccines he or she needs to survive and thrive,” said Dr. Matshidiso Moeti, WHO Regional Director for Africa. “It is unacceptable that one in five African children lack access to lifesaving vaccines, and this report is an urgent wake-up call to Africans of all walks of life and at every level.”

“We can and must do more to protect all our children from devastating illnesses – not only because it is our responsibility to ensure healthier futures for our citizens, but also because it is a smart economic decision,” said Dr. Kesetebirhan Admasu, Minister of Health for Ethiopia.

“This is the start of a new era of health on our continent, in which all countries commit to saving and improving children’s lives using one of the most powerful tools ever invented: vaccines. Africa’s unity on immunization is our best hope for a better future,” said H.E. Dr. Nkosazana Dlamini Zuma, African Union Commission Chairperson.

The report paints a mixed picture of the state of immunization among Africa’s children. On the positive side, there has been some strong progress in vaccination on the continent:

Despite these achievements, the report outlines some of the significant challenges that remain:

Countries urged to increase investments in immunization, given the economic benefits

While donors have played an important role in supporting immunization programs, long-term domestic commitment will play a bigger role in increasing access to routine and new immunizations. The proportion of domestic funding varies widely across African countries, ranging from 0% to 100%. Only 15 African countries fund more than 50% of their national immunization expenditures.

Currently, Gavi, the Vaccine Alliance has invested heavily in Africa, supporting 70% of countries on the continent (38/54 countries). As more African countries attain middle-income status, they will not be eligible for support from Gavi. This means that they will have to make preparations to finance immunization activities from their own national budgets.

There is growing evidence of the economic and social benefits of immunization. In addition to immunization’s potential to save lives. Research suggests that meeting the projected costs of national immunization programs is worth 16 times the original investment. At the community level, avoiding the costs associated with a vaccine-preventable disease can help keep whole families out of poverty.

The report, available for download here, has informed a ministerial declaration that will be open for signatures during the conference in Addis Ababa, Ethiopia. The declaration honors the progress of recent years, while also committing to universal access to immunization and strengthening of vaccine delivery systems. After the conference, the declaration will be presented to the Assembly of African Head of States and Governments at the 26th Summit of the African Union, to be held in June 2016.

More information: Please visit the conference website www.immunizationinafrica2016.org. You can also follow conference developments on Twitter with @AfricaVaxConf and join the discussion using #MCIA16 and #vaccineswork.