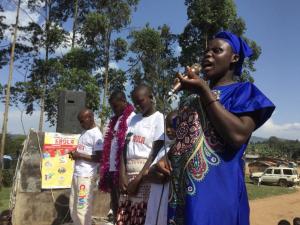 When 33-year-old Kanyere Vwatire first left a health facility, it was the middle of the night and she was running away.

Staff from the World Health Organization (WHO) were making arrangements to transfer her to an Ebola treatment centre and she was terrified. Fortunately for her, she ran to her neighbour, who happened to be a police officer and knew very well of her family’s situation and what Kanyere needed if she was to survive.

She needed to be in a proper treatment facility. But Kanyere was refusing to go. The chief health clinic nurse who took the call from the police officer that 30 August night and made the arrangements remembers how Kanyere resisted “bitterly” and “broke the furniture” in her neighbour’s home.

Although she was reluctant to go to the treatment centre, Kanyere now is grateful. “At the [Ebola treatment centre], much to my surprise, I was warmly received. The doctors would plead with me to eat when I had no appetite. They were really nice and hospitable. I thank them now – I regret my refusal to cooperate and do apologize to every one of them,” she says as neighbours, waiting out in the road, sing and dance in celebration of her surviving.

This time, Kanyere is leaving a health facility, the Katwa Ebola Treatment Center, in a carnival-like procession of about a hundred people on motorcycles from Kyambogho, her village, which is an hour’s drive high into the mountains from Butembo city in the eastern Democratic Republic of the Congo (DRC).

"I will forever remember this 20 September 2019 as a day when I was discharged from the Ebola treatment centre and returned home, completely cured of Ebola," chants Kanyere in her mother tongue, ki-Nande.

After the discharge process is finalized, complete with a brief ceremony in the visitors’ space and a certificate pronouncing her Ebola-free, Kanyere walks out in a shining blue dress into a chaotic blaring of horns to meet her father, who has also survived Ebola, at the exit gate.

The jubilant procession takes Kanyere and her father to their local Catholic church courtyard where she stands before more than 400 neighbours who have come to welcome her home. Visibly moved, Kanyere tells them of the frightening and promising realities she has learned about Ebola.

I refused to heed doctors’ advice

“In my life, I had never believed in the existence of the Ebola disease, in spite of everything that I was told about it. However, I felt devastated after my mother was killed by the Ebola virus disease. I refused to heed doctors’ advice that I should go to the Katwa [Ebola treatment centre] for screening, even though my father was hospitalized there,” she tells them.

The revellers settle quickly into a deep quiet.

“The day when my illness got aggravated, I rushed to a private health centre known as Bon Berger. The doctor at this centre also urged me to go to the Katwa ETC, but I refused. I started vomiting blood, but I still refused to go to the ETC,” she says.

The crowd stands silent, a silence so heavy only the flies could be heard.

“When I realized that they could refer me to the ETC at any time, I decided to run away. I removed the serum perfusion and sought refuge with one of our neighbours, a police commanding officer, where I got evacuated to Katwa ETC during the night.”

She took a breath. “Dear parents and neighbours, you who have come here to welcome me. You should know that Ebola does exist. It can be treated if one rushes to the ETC immediately after the early signs show up. I am standing before you as a living proof."

A music group begins singing in ki-Nande, “Ebola is reality, we must fight it together.”

If you wait too long…

When she had finished, her father also spoke. "I confirm the existence of the Ebola disease and advise you all not to wait for too long. When you notice the early signs of this disease, please rush to the ETC. If you wait too long, the doctors won’t be able to help you. I lost my wife, but my daughter and I are standing today in front of you [because we were] cured by the Katwa ETC."

At this point, their neighbours erupt again in singing and dancing. Everyone wants to shake Kanyere’s hand – to touch her.

Dr Youba Kandako, WHO Field Coordinator for the health zone, credits the hospitalization and healing of Kanyere, a patient he described as uniquely “fierce”, as the result of combined efforts by the chief nurse of the Kyambogho health centre, the Ebola treatment centre and surveillance staff and the WHO team handling case management, community engagement and supervision of contact tracing.

Two days after the fanfare, Kanyere is standing in her kitchen, cooking lunch for her family. When asked how she’s feeling, she looks up, smiles and says to follow her.

She plucks a 20-litre can already filled with water onto her back and heads for the water collection point some 50 metres from her house, up a steep slope. At the spigot, she drops the can and turns around beaming: “Here I am, fit again, aren’t I?"