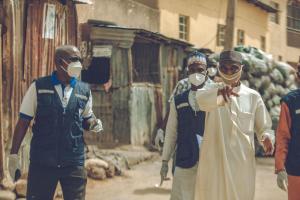 Kano – When health officials in Kano State noted that turnouts for Covid-19 testing were consistently low across communities, they grew worried. Many residents were unaware of how serious the Covid-19 disease was, and despite sensitization messages on the pandemic, some did not believe COVID-19 was real. How then, officials worried, would health workers be able to convince residents to submit themselves for testing so infected persons could be isolated and treated?

In early June, officials led by Dr Tijani Hussaini, Kano State Incident Manager for Covid-19 sought help from community leaders in Zango and Dorayi wards, located in the Kano Municipal Council and Gwale Local Government Areas (LGAs) respectively. State officials working with World Health Organization (WHO) and the Nigeria Centre for Disease Control (NCDC) had already determined that the two wards would be the pilot points for a state-wide sample collection: the wards recorded the highest COVID-19 positive cases and testing in both communities was essential.

The supportive response of the community leaders in the two wards took health officials by surprise. Not only were the leaders willing to explain to people in the community why they should cooperate and submit themselves for testing, but they would also make sure their own families led the way in the efforts, they said. They connected with Imams, as well as market women leaders and youth leaders to seek their support and ensure community members turn out for testing.

“The first information we delivered to people is that Coronavirus is a reality,” says Alhaji Mohammed Rabiu Mahmud, a 67-year-old community leader in Zango Ward who spent three days speaking to community members. “Some believe that there is nothing like corona (COVID-19), but we, the leaders, believe there is. We told them it is a disease now all over the world and it can be transferred to another person through contact. So we convinced our people to come out.”

Community members listened. It was a successful mobilization, Alhaji Mahmud says. More than 800 people in his ward alone, including his family and friends, turned out. Health officials collected over 2200 samples in Zango and Dorayi in four days of community testing. The samples accounted for 40.9% of the total 5,378 samples collected in Kano state since April 2020.

A spate of unexplained deaths recorded in Kano between March and April partly drove the urgency in the need for testing. On 28 April, President Muhammadu Buhari ordered a lockdown in the state and deployed experts to assist the state’s investigations into the cases. The deaths were suspected to be COVID-19 related as infections spiked: Kano recorded its index COVID-19 case on 11 April, nearly two months after the country’s first confirmed case. So far, Kano has reported 1200 cases.

“Most of the cases in Kano met the WHO’s definition of community transmission as there were cases that could not be linked to travels and primary contact to cases,” says Dr Loveday Nkwogu of WHO who worked with the Kano state team to map out high-risk communities. “This underscored the need to explore the extent of community transmission to avoid explosive outbreaks.”

Curtailing an outbreak in Nigerian cities and particularly in Kano is crucial. With an estimated population of 20 million, according to the state’s government, Kano is one of Nigeria’s most populous states. It is also the commercial nerve of the northern region and boasts a busy international airport.

In line with WHO guidelines, widespread testing remains essential in identifying, isolating and treating infected people. With the help of community leaders in Dorayi and Zango, the first step in community testing – sample collection – is completed in both wards. The test results are being released in batches. Alhaji Rabiu, a community leader, says some 25 cases were recorded in his community. Now, he and other community heads are following up by helping state officials trace the contacts of confirmed cases to identify them for further testing.

“I was sceptical because I thought there would be resistance from the communities,” said Dr Hussaini, Kano state’s COVID-19 Incident Manager. He noted that the collaboration with WHO and NCDC was crucial in identifying risk communities and spearheading the sample collection. Using geo-location data, the officials also assisted the state to map “silent wards” – areas with fewer recorded cases neighbouring the COVID-19-affected communities.

“Moving forward,” Dr Hussaini added, “We will expand it (the sample collection) to all the LGAs of the metropolis and some silent LGAs based on the selection criteria. It is the way to go.”