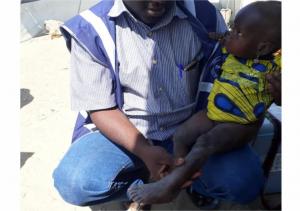 Following nearly a decade of insurgency, many local government areas (LGA) in Borno State have become access-compromised, making it difficult for the local population to access basic health services and quality healthcare. Infants have been one of the main victims of this situation as health workers in some areas have been unable to distribute vaccines or provide much needed routine immunization services. In this context, children are particularly at risk of vaccine-preventable diseases such as polio.  `

Key to rapidly detecting any poliovirus that might be circulating, and thereby enabling a rapid outbreak response, is the timely detection and investigation of all cases of acute flaccid paralysis (AFP) – in other words, any child who develops sudden weakness of the limbs.  Such AFP surveillance is the backbone of the global polio eradication effort.   However, the current insecurity across the North East has made it challenging to carry out effective identification of all AFP cases and thereby, fully verify the absence of poliovirus in the area.

Broadening the base of persons actively searching for AFP

From 31 January till 31 December 2018, the community informant initiative has helped to significantly strengthen the disease surveillance capacity in key areas, including hard-to-reach areas.

He further proffered that “It is therefore imperative that we continue to sustain the progress achieved in AFP surveillance in insecure areas, through the use of community informants as this strategy also opened a window of opportunity of providing additional basic maternal and child health interventions to these underserved/vulnerable populations.”

Building on this success, WHO and its partners will continue to support Nigeria in sustaining this work and ensure that all AFP cases are detected. “As a key partner of Nigeria in the effort against polio, WHO is committed to sustaining and expanding the hard-gained progress achieved in surveillance in hard-to-reach areas” says Dr Clement Peter, Officer in Charge (OiC), WHO Nigeria.

In addition to its support to the community informant initiative, WHO will aim at expanding AFP surveillance network in the region notably through the sustained integration of Mobile Hard-to-Reach teams into surveillance activities.

Engaged local informants have also been very helpful in monitoring other IDSR diseases such as measles, whooping cough, Tuberculosis (TB) and meningitis. The community informant initiative was made possible with active support of the Bill and Melinda Gates Foundation (BMGF). 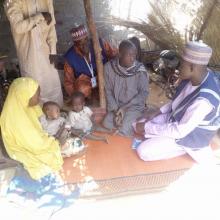 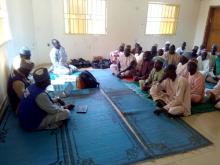 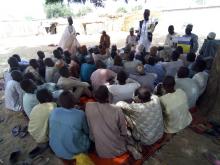