Communities and coordination are crucial in fighting Ebola 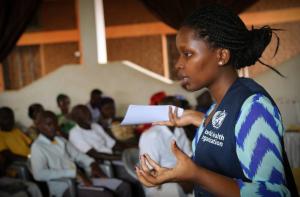 Communities and coordination are crucial in fighting Ebola

Cibitoke, Burundi - 3 July 2019 -- Close to the border with the Ebola-hit Democratic Republic of Congo (DRC), over 100 volunteer health workers are busily planning surveillance actions to detect potential Ebola cases and defend against the virus.

The Ebola virus disease has moved closer to the 147 km land border between Burundi and the DRC since the outbreak began in August 2018 in North Kivu.

“The potential victims are their children, their neighbours, their community members,” explains Dr Céléstin Ndayahoze, Chief Medical Officer of the Cibitoke District and a trainer, “so the disease threat directly impacts them.”

At today’s training, the volunteers get new guidance on spotting Ebola symptoms, keeping communities involved in the fight against Ebola and taking adequate measures in case of an emergency.

“What they take home with them is a classic ‘picture box’ graphic tool to spot common symptoms, with the addition of Ebola and instructions on how to report it,” explains Dr Ndayahoze.

Strong involvement of communities in surveillance is crucial to preventing the local transmission of the Ebola virus in all four nations – Uganda, South-Sudan, Rwanda and Burundi - that border the DRC’s Ebola-affected north-east. Since the outbreak began, over 66 million screenings of travellers have taken place in the DRC and along its international borders.

In Burundi, with the World Health Organization (WHO) support, more than 4 000 community health volunteers have been trained so far as part of a coordinated national surveillance strategy.

Burundi has 21 official border crossing points, which can screen all travellers for symptoms of Ebola and safely manage cases.

“To date, we’ve screened around 8 million people,” explains Dr Bisimwa, “and all points of entry have crucial infection prevention and control supplies and equipment.”

Dr Leonidas Misago, Director of Health Promotion for Burundi’s Health Ministry, says that alongside surveillance, the wider population is being informed about the risks.

“We work with the media and we use tools like posters and leaflets, but behaviour change is complex, it’s a process, so encouraging people to wash their hands, for example, takes time.”

According to Dr Bisimwa, border screening, surveillance and outreach is very much the frontline in a comprehensive set of systems being built to fight Ebola.

“Preparedness involves all levels,” he says. “Nationally, in the districts and in communities. At the national level, we have several coordination structures, including an emergency task force.”

WHO has helped set up two rapid response teams to manage cases in the country and has supported a number of simulation exercises, including for safe and dignified burials – considering the risk associated with unsafe burials.

The organization is also helping to set up facilities for Ebola diagnosis, a national Ebola treatment centre and is supporting the training of health professionals on case management. Burundi is also gearing up to vaccinate front line health workers.

“While surveillance is going well,” notes Dr Bisimwa, “we have significant challenges related to coordination.”

“We still don’t have a Public Health Emergency Operation Centre, which is key to overall coordination, and at the health district level, there are still lots of gaps.”

“Another challenge is the insufficient material for Infection Prevention and Control,” notes Dr Bisimwa. “For this, we’re mobilizing donors to support Burundi as it is a highly expensive budget line.”

Across the region, funding for Ebola preparedness, which is crucial for countries to put in place systems to detect, investigate and report Ebola cases, as well as adequately manage patients, is declining.

The budget in the four most at-risk countries was nearly $US 70 million over the past year, but there remains a 40% funding gap for the next six months.

“We’ve seen how good groundwork – good preparedness work – has helped ensure an effective and timely response in Uganda, so I can only urge the international community to keep up the support,” said WHO Regional Director for Africa, Dr Matshidiso Moeti.

“I’ve seen with my own eyes how this investment saves lives. Preparedness works.” 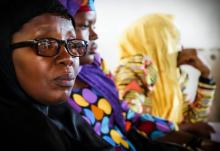