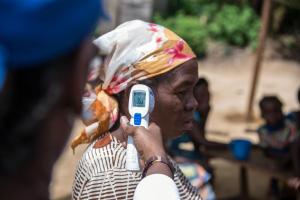 Gabriel Mabikina has lived most of his 80 years of life in the bustling port city of Pointe-Noire in the Republic of Congo.

The retired businessman is a community leader and he has noticed many changes in his city.

Following the declaration of a Yellow Fever outbreak in the Republic of Congo in August 2018, Mr Mabikina was among the more than 1 million people who turned up to be immunized during a vaccination campaign against the disease in September.

Mr Mabikina’s observations about the profusion of mosquitoes are supported by surveys conducted in the affected area which reveal high densities of Aedes aegypti, the mosquito that spreads Yellow Fever.

Across Africa, diseases transmitted by bloodsucking insects – including ticks, fleas and sandflies as well as mosquitoes – are emerging and re-emerging, and epidemics are reported more frequently than before.

Evidence is mounting that climate change – in addition to population movements and deficient urban planning – is contributing to these public health crises which place huge socio-economic burdens on vulnerable populations in low-capacity countries. These burdens may potentially jeopardize the ability of many countries to attain the sustainable development goals by 2030.

“Epidemics, health emergencies and weak health systems not only cost lives but pose some of the greatest risks to the global economy and security, faced today,” says Dr Ibrahima Socé Fall, WHO’s Emergencies Director for Africa. WHO will be presenting a special session on global health security and environmental security at the Third Inter-Ministerial Conference on Health and Environment in Libreville, Gabon on 8 November 2018. “It is absolutely vital that African public health officials develop robust strategies to reduce the vulnerability of the population to climate-related health threats and increase resilience.”

According to The 1.5 Health Report, a synthesis of the health content of the Intergovernmental Panel on Climate Change (IPCC) special report on global warming of 1.5C: “There is strong evidence that changing weather patterns associated with climate change are shifting the geographic range, seasonality, and intensity of transmission of climate-sensitive infectious diseases.”

The report goes on to note that climate change may also put more people at risk of other infectious diseases including other insect-borne diseases such as malaria and Dengue Fever and waterborne disease such as cholera, typhoid and hepatitis.

In addition to the impact of infectious diseases, climate change poses other health risks from increased flooding and sea-level rise, reduced air quality and food insecurity.

In response to the increasing climate-related health threats, member states in African region in 2016 adopted the Regional Strategy for Health Security and Emergencies which, along with the International Health Regulations, aims at strengthening countries’ capacities to detect, prevent and response to public health emergencies. Meanwhile, in Pointe-Noire, Mr Mabikina professed himself to be very glad of the vaccination campaign.

“I feel very protected,” he said. “I have confidence in this vaccine which I received.”