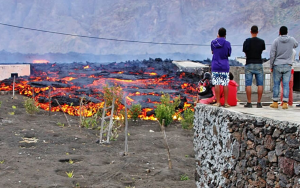 It was past midnight when the ringing phone shook Manuel Raimundo from deep sleep in his Praia City home with an emergency unlike any he had ever experienced.

“Alert, alert – alert, alert!” shouted a colleague from Fogo Island, some 93 km away.

“Chã das Caldeiras is erupting! Lava is now slipping down from the summit, covering houses and farms in the large crater,” continued the shouting from the emergency centre colleague.

As the Administration and Logistics Director at the National Service of Civil Protection and Fireguards of Cabo Verde, it was up to Raimundo to declare the red alert. Working quickly through the protocols, he made the call.

Then he took the first flight he could find to Fogo Island. He remembers feeling nervous the whole of the 30-minute journey: “The lives of people were at risk.”

Touching down, he shifted immediately into operations mode. Driving towards the still-erupting volcano, he saw people panicking: “There was a lot of unrest in the area, people were fleeing away from the lava, taking whatever belongings they managed to secure,” he recalls.

He saw two communities covered by the lava. “We needed to host the people somewhere. A settlement area was designated outside of the crater for a few hundred people. I was in charge of all logistics for the new accommodation centre, where we had to host all the internally displaced people.”

It was November 2014, and Raimundo remembers it as if it was a few days ago. “It was really challenging and overwhelming for me,” he says. “Many things could have been done in more effective and coordinated way, but at least we managed to avoid any human casualties.”

Jump forward to September 2019, and Raimundo is participating in the Joint External Evaluation (JEE) of Cabo Verde’s capacities to implement the International Health Regulations (2005). It is an exercise promoted by the World Health Organization (WHO) to strengthen essential capacities for managing public health risks and emergencies, like what Raimundo experienced five years ago.

In his assessment of the workshop experience, Raimundo specifies his clarity on how the International Health Regulations apply to all sectors of a government, not just health. The regulations are actually a legally binding instrument of international law, agreed by governments, for handling emergency situations to prevent the spread of diseases and other health risks, save lives and avoid unnecessary interference with international trade and travel.

The workshop, he later explains, showed him how “to work continuously in articulation with all affected departments in government, civil society and communities.”

The main goal of the JEE, which should be carried out in every WHO Member State, is to assess the essential capacities of a country to prevent, detect, respond and manage public health emergencies.

According to Flavia Semedo, WHO Health Emergencies Officer in Cabo Verde, “WHO is working with the Ministry of Health and Social Security to bring together and facilitate the knowledge sharing among the main actors from all government departments, universities, civil society and private sectors involved in the response to emergencies.”

All actors, Raimundo stresses, should be well coordinated during an emergency to speed up the response. “Being here, all together in this room, is absolutely a great opportunity to interact and get to know each other better” as well as better understanding everyone’s role in an emergency.

Learning with colleagues from other sectors opened his eyes, he says. “I learned a lot from the health sector colleagues, and it is imperative that the civil protection and health are well integrated because all emergencies have an impact on human health.”

And, he concludes, “after a natural disaster, diseases may appear – if we work together, we can be better prepared to face them.”

Likewise, Roland Wango, WHO Coordinator for JEE in the African Region, highlights the multisector approach of the JEE and the importance of engaging all stakeholders to achieve a quality outcome that helps a country better assess its level of preparedness for any public health emergency, from an erupting volcano to an exploding measles outbreak or an Ebola crisis.

“Although Cabo Verde is peaceful in terms of public emergencies, compared to other countries in the region, it is still very important to be prepared,” Wango adds.

“Cabo Verde is a popular tourist destination – an epidemic anywhere in the region could reach the archipelago within a day through its many points of entry. The country is prepared to face an emergency situation, but regular training and evaluation is critical.”

“Based on my experience, this exercise is really important for the country,” Raimundo says during the JEE exercise. “I am learning a lot on our strengths and weaknesses by answering the questions and interacting with the colleagues. This evaluation will help us to improve and be better prepared to face emergencies in the future, no matter the nature.”