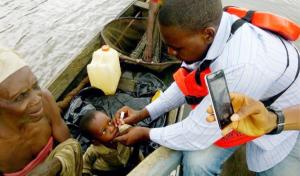 Yenagoa, 28 April 2019 -“We had not seen vaccination teams in our community for a very long time. Sometimes we have to stay for months without vaccinating our children, if we don’t take our children to the mainland to get them vaccinated”, says Mr. Atebakuro Oton George, a fisherman and father of five, residing at Itohono-ama settlement of Minibie ward of Bayelsa State.

“Now on weekly basis, health workers brave the Seas and visit our communities to vaccinate our children”, an elated Mr. George continues.

In Bayelsa, a largely riverine State, accounting for over 60% of the delta mangrove of the oil-rich Southern part of Nigeria, known as the Niger Delta, many children continue to be ‘missed’ with life-saving vaccination. In 2018 a number of innovative strategies such as mid-sea immunization, community engagement through the traditional hierarchy and sensitization activities, supported by World Health Organization (WHO) through the Government of Bayelsa were introduced to address some of the identified challenges.

“The difficulty of accessing healthcare services is due to suboptimal and expensive coastal and waterway transportation from the distant communities to healthcare centers, hence, innovative strategies are being employed to reach the underserved and vulnerable population with vaccination and other health interventions especially during Supplemental Immunization Activities (SIAs)”, says Dr Edmund Egbe, WHO State Coordinator in Bayelsa. He further adds, “Healthcare service providers transiting from one settlement to another during such campaigns are always vigilant to ensure that no mother or eligible child is missed”.

In Bayelsa State, huge bodies of water traverse cluster of settlements ranging from streams, creeks, lakes, rivers and the Atlantic Ocean. Subsistence farming and fishing are the mainstay of the local population’s economy and source of sustenance of the largely indigent families, resident in these communities and fishing camps. Health care services are provided by the primary health care centers located within the island communities.

To address the negative fallout, community engagement activities to increase demand for immunization have been initiated to bolster willingness of caregivers to readily access the interventions even when in the middle of the river or the ocean. The successful implementation of the community engagement framework has culminated in a high-level patronage and acceptance of immunization services in the State. From April 2018 to April 2019 alone, over 169,836 children received vaccination.

Routine immunization coverages have improved remarkably the first quarter RI Lots Quality Assurance Survey (LQAS) conducted in April 2019 indicate that the State is second best in the country. Previously, the State was ranked amongst others in the country as poor-performing from the last National Immunization Coverage Survey (NICS) conducted in 2016; this led to the inauguration of an emergency response committee in March 2018. Regarding Supplemental Immunization Activities (SIAs), the State achieved a 94% coverage in the last round of IPDs, and 369,926 women of child bearing age were vaccinated against tetanus during the first round Maternal Neonatal Tetanus Elimination (MNTE) campaign.

In his remark during quarterly engagement meeting in April with the State Traditional Rulers Council, the Chairman, King Alfred Diete-Spiff, the ‘Amanayanbo’ of Town-Brass, commended the progress recorded by the State with support from WHO and other partners in improving access to immunization in very hard to reach communities in Bayelsa. He encouraged his counterparts in the Council to ensure parents in their domains cooperate with health officials to improve their overall wellbeing.

“Sustaining the innovative strategies of vaccinating vulnerable populations will undoubtedly increase immunity against vaccine preventable diseases and reduce the mortality and morbidity rate in difficult to access communities”, King  Diete-Spiff said. He described the polio infrastructure in the Bayelsa, supported by WHO and partners, as the bedrock of driving successful healthcare intervention at the grassroots and underserved populations.

Presently across Nigeria, States are implementing activities to commemorate the 2019 Africa Vaccination Week to improve immunization delivery so that all children are protected from vaccine preventable diseases. The theme for this year’s African Vaccination Week (22-28 April) is “Protected Together: Vaccines Work!” emphasizing the power of vaccines in saving lives and keeping everyone healthy, from infants to elders. 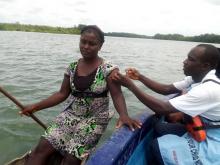