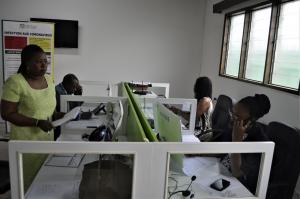 Cotonou – After the first case of COVID-19 was announced in Benin on the 16 March, within four days, the West African nation had set up a range of digital platforms to help combat both the spread of the disease and what the World Health Organization (WHO) has called “infodemic” of misinformation around it.

Spearheaded by Wilfried Léandre Houngbédji, a former journalist, supported by well-known Beninese social media expert, Stévy Wallace, a state-appointed team of around 15 people is using WHO guidelines to disseminate information on prevention and highlight the actions being taken by health authorities to deal with the unfolding crisis.

In addition to a centralized official government platform that is freely accessible to all mobile phone users in Benin and provides frequent updates, the digital strategy team has put out several radio inserts in around 15 local languages and a range of awareness videos and press releases across different social networks. An interactive WhatsApp messaging system has also been set up and helps the new team to communicate directly with citizens both in Benin and the diaspora.

“The official information is being very well relayed on social networks,” says Wallace. “Internet users are interacting expansively with the channels through questions, comments, contributions and criticism.”

On the official pandemic website, the most visited portal, up to 16,000 hits are being registered per day. The website also has a COVID-19 ‘flash news’ function for near instantaneous response to fake news.

"The big challenge for us is that we cannot reach certain sections of the population who do not have internet access or who are illiterate,” Wallace adds. “So we need each internet user to pass on the correct information in their homes, their neighbourhood, their community. The cause must be a common one.”

As COVID-19 cases continue to increase exponentially throughout Africa, with more than 10,000 people now infected across 52 countries, widely-accessible, responsive mobile and online communication platforms and messaging are a critical part of efforts to curb the spread of the virus.

With the help of WHO’s guidelines, Houngbédji and Wallace’s team has rapidly grown the state’s online presence since the start of the outbreak, and the Beninese public has taken note. “They react very quickly to questions," says Emmanuel Ganse, who runs a local startup.

“It makes us feel closer,” says Nafissate Hounkpatin, a midwife. “We feel that we are really being listened to.”