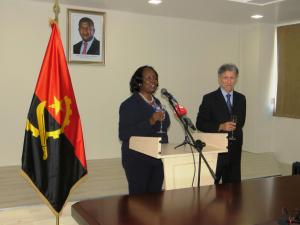 Luanda, 22 January 2020 - In a ceremony held in the  capital Luanda under the leadership of the Minister of Health, Silvia Lutucuta, members of Government and health sector partners paid tribute to Dr. Hernando Agudelo, World Health Organization’s (WHO)s outgoing representative in Angola.
For seven years as WHO country representative, Hernando Agudelo successfully led programmes to support the Government of this country to strengthen universal access to health as well as response to outbreaks notably cholera, yellow fever, polio and measles.
Minister Lutucuta lauded  the outgoing WHO representative’s zeal and dedication,  partnership with local authorities and their partners. He noted Dr Agudelo’s work in making WHO services  available to Angola and Angolans, especially at critical moments, in situations of crisis and epidemiological emergencies that have affected the country.
"Angolans acknowledge the efforts and dedication of Dr. Hernando Agudelo and on behalf of the country's highest representative, I would like to express our deepest gratitude for the dedication and commitment with which he carried out his duties and the noble mission of saving lives."
In describing the support provided by WHO in Angola, the Minister of Health reiterated the commitment of the Government of Angola to comply with the guidelines issued by the organization  in particular, WHO Regional Committee for Africa and the World Health Assembly. The minister underscored that WHO has been supporting Angola through five essential pillars, namely the elimination of communicable and non-communicable diseases; lifelong health; strengthening the health system; combating polio; and responding to emergency outbreaks and health crises.
The outgoing WHO Representative, Dr. Agudelo, thanked the Government of Angola and its partners for their support during his consulate. "I have had such pleasure working in Angola," said Agudelo, adding that, "this is a promising country with enormous potential for exceptional health achievements.
"My final advice is to intensify initiatives to strengthen actions in key areas, especially primary health care that can help to decongest the flow of patients in the country's referral units, and to strengthen initiatives to eliminate the tuberculosis epidemic globally, which continues to affect thousands of people, particularly in Angola."
After seven years of mission in Angola, Dr. Hernando Agudelo leaves the country for Cape Verde, where he will serve as WHO Representative.