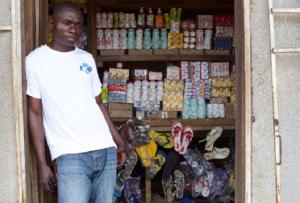 Since he was a teenager, Didier Ipete wanted to run his own store. He would have liked to have studied at university but he didn’t have that opportunity. Nevertheless, he was happy to build up his business until it was one of the most popular shops at the market in Itipo, a small community in Equateur province in the Democratic Republic of the Congo.

In May 2018, however, Ipete contracted Ebola after caring for a friend who had been infected by the virus. He was hospitalized at the Ebola Treatment Centre in Bikoro for 15 days, during which he did not see his wife or four children. Loved ones can sometimes talk to patients when they are in recovery, but his family could not reach the treatment centre because of the lack of roads and transport in the remote forest area. He survived the illness but is now struggling to pick up where he left off.

During the two weeks he was in the treatment centre, his wife used goods from the shop to feed their children who range in age from 2 years to 10 years old. Ipete does not now have the funds to replenish his stock. Unfortunately, he may not need to. His previous customers, wary of interacting with a survivor of Ebola, now prefer to shop elsewhere, he says.

The situation in which Mr Ipete finds himself – with old friends distancing themselves from him and a sense of stigmatization – is something he shares with the others who recovered from Ebola during the recent outbreak.

Like them, he also suffers from a number of physical long-term effects of the Ebola virus infection including impaired hearing and vision, joint aches and fatigue. This has left many of the survivors concerned about whether they will be well enough to work and support their families.

Another survivor, Solange Boloki, suffers from head and stomach aches, and sore knees. “Life could be like this for two years or more,” she says.

The survivors in Itipo and elsewhere have been able to provide support for each other through the formation of a survivors’ association: l’Association Nationale des Vainqueurs d’Ebola, which translates as the National Association of Ebola Survivors. The association is being supported financially and administratively by the Ministry of Public Health.

Father Lucien Ambunga, a Catholic priest in Itipo and also a survivor, has been the driving force behind the survivors’ association and has been named its president.

For him, the association’s role is not only to provide mutual support but is also a platform to engage with the wider community, sensitizing local people about how to protect themselves against Ebola and to address issues related to stigmatization.

Meanwhile, WHO and other partners are supporting the Ministry in putting together a care package to support the survivors, which will be coordinated by their association. The year-long progamme has three components, the first two of which are medical follow-up and psycho-social support. Because parts of the Ebola virus can be detected in the semen of some survivors for several months, the third component is screening of semen and counseling to reduce the risk of possible transmission of the virus between sexual partners. Counselling will be offered to both women and men.

“People cured of Ebola can suffer from medical and psychological complications,” says Anais Legand, a WHO technical officer with the Viral Haemorrhagic Fevers team who worked on supporting the Ministry to implement the follow-up programme for survivors.

“For example, they can have joint pain, sight and hearing problems, headaches, and memory lapses. Psychological problems can include depression and post-traumatic stress disorder. For these reasons, integrated and multidisciplinary follow-up is essential.”

WHO will continue to work with the survivors in Itipo and elsewhere in the country to support them in their recovery.