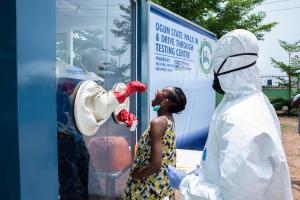 Brazzaville – On an overcast morning on the outskirts of the Kenyan city of Kisumu, which perches on the edge of Lake Victoria, a queue of commuters receives a spritz of hand sanitizer before boarding a minibus taxi, known locally as a matatu, to head into town.

As soon as they’ve taken their seats, they pull out their phones and punch their contact details into a passenger manifest and make a cashless payment for their trip, all via a free app called mSafari. This new innovation, launched in late March, provides crucial contact tracing data to the Kenyan Ministry of Health as the country moves to curb the spread of COVID-19.

“The virus doesn’t move, people move,” said Ronald Osumba, a Kenyan entrepreneur whose company iGovAfrica created mSafari. “The majority of people in our cities use public transport every day, so this is central to containing the spread of the virus. People have been astonished at how simple our idea is, but also how impactful it can be.”

All over the African Region, local innovators have moved decisively to address critical gaps in the response to the pandemic, often in contexts where traditional health services are stretched and where a multi-sectoral approach is therefore especially important.

“Africa presents particular challenges that have always forced us to innovate,” said Osumba. “I believe that our ability as Africans to think outside the box can really pay off in the fight against COVID-19.”

Since the first case of the virus was detected in sub-Saharan Africa exactly three months ago, World Health Organization (WHO) has sought to foster close collaboration with an extensive network of regional innovators and support their pioneering solutions to help contain the virus in lower-resource settings.

The Organization hosted its inaugural ‘Hackathon’ in early April, which tasked groups of participants with developing scalable concepts aligned with one of the eight pillars of WHO’s current COVID-19 response strategy: coordination; surveillance; risk communication and community engagement; points of entry; laboratory; infection prevention and control; case management and continuity of essential health services; and operational and logistics support. The three highest ranking groups were awarded seed funding to begin implementing their innovations.

Last week, WHO also facilitated the first of what will be an ongoing series of virtual sessions for innovators across the region to showcase home-grown solutions that have already been implemented in their respective countries and have significant potential to be scaled up further across the region. Osumba of mSafari was among the eight innovators to present at the first showcase.

“Innovation should be an integral part of our way of doing things as an organization. I believe that creating these kinds of platforms shows the relevance of WHO in helping to provide practical, contextual solutions,” said Dr Moredreck Chibi, the WHO regional innovation advisor.

Dr Ola Brown, the founder of Nigerian company Flying Doctors, also presented at the first virtual innovation session. Based in Lagos, Dr Brown noticed that there were a number of issues with regards to testing in a densely-populated country that has seen worryingly high numbers of infections among its frontline health workers.

“We already have so few health care workers in the country, so protecting them from infection is incredibly important,” said Dr Brown. “There’s no direct contact between the health worker in the booth and those being administered with the test outside. Between tests, a hygienist just disinfects the heavy duty gloves and then you can move onto the next test, so you don’t need to keep providing new PPE and the health worker stays safe,” she added.

At a mobile testing booth in Ogun State in southwest Nigeria, Deji Sofoluke, a young medical laboratory scientist, said that he can now do more tests in a couple of hours at the mobile booth than he was previously able to do in a whole day of home visits. “It’s faster, it’s easier, it’s safer, and it uses less resources. This should be scaled up across the whole region,” Sofoluke added.

In neighbouring Ghana, Laud Basing, a local entrepreneur with a background in microbiology and biomedical engineering, has led a team of medical scientists in collaboration with the Kwame Nkrumah University of Science and Technology to develop a low-cost and easy to produce Rapid Diagnostic Test (RDT) for COVID 19.

According to Dr Basing, this new antibody test, which provides results in 10 – 15 minutes, will be crucial in keeping track of the virus as countries in the region, including Ghana, begin to ease their lockdowns and gradually reopen society. “While other tests will show negative results for those who have already had the virus and recovered, our test reveals those who have previously been infected and developed antibodies, which will help with surveillance as we will be able to see the full extent of exposure in different areas.”

Like Osumba and Dr Brown, Dr Basing also presented his RDT at the first WHO innovation virtual showcase last week. He has simultaneously been working on a mobile community level screening platform that was initially developed through the WHO Hackathon and was among the three projects to receive seed funding from the Organization.

“There are so many brilliant ideas coming out of Africa and an organization like WHO can really help our innovators to shine and encourage them to keep going,” said Basing.

“Innovation is what is going to turn the African health space around.”