Africa: The Elimination of Neglected Tropical Diseases Is Finally Within Reach 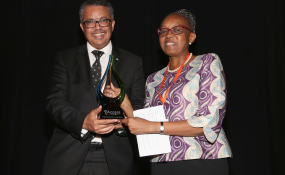 Over the past six and a half years, we’ve witnessed an extraordinary international endeavour to stamp out Neglected Tropical Diseases (NTDs), a group of dangerous, destructive conditions that threaten the lives and well-being of more than 1.5 billion people worldwide. NTDs earned their name because they were relatively unknown and overlooked for decades. But that is rapidly changing, thanks to the coordinated efforts of governments, health and development organizations, donors, and private companies.

These efforts consolidated with the signing of the London Declaration in January 2012, when stakeholders committed to controlling or eliminating 10 NTDs by 2020. That was followed by pharmaceutical companies pledging more than US$17.8 billion in drug donations, which provided an essential arsenal of drugs to combat these diseases. Then, in May 2016, the World Health Organization’s (WHO) Regional Office for Africa created the Expanded Special Project for Elimination of Neglected Tropical Diseases (ESPEN) to coordinate actions of NTD affected countries and public and private entities to accelerate the elimination of NTDs in Africa by 2020.

Africa carries almost 40 percent of the worldwide burden of NTDs. Five of these NTDs can be cured and prevented using preventive medicine (preventive chemotherapy or PC). A total of 44 African nations have widespread occurrence of at least one PC NTD and 42 countries of at least two. These diseases can ravage entire families and communities, causing debilitating physical and mental symptoms, terrible disfigurement, and long-lasting disabilities. And because they prevent people from going to work and children from attending school, they have an enormous impact on financial stability and educational attainment.

The ESPEN Partnership has provided a strong coordination framework to coordinate the fight against NTDs, and it has helped bring about tremendous results over the past two years. Through this coordinated action, we are working on filling the gaps and reaching all those never reached before with mass drug administration, and improving supply chain management to ensure every donated tablet reach the children and families who need them. ESPEN has worked in close collaboration with Ministries of Health in NTD affected countries for the development of annual national plans of action to better leverage donated drugs, scale up treatments to 100% geographical coverage and improve management of their programs.

We are making impressive strides in Sub-Saharan Africa. Last year, Togo eliminated lymphatic filariasis as a public health problem, and Ghana eliminated trachoma in May 2018. As health technicians, partners and community health workers continue to come together to aid and protect the most vulnerable members of our communities, we are poised to reach similar milestones in other nations throughout Africa.

Progress is being also made in addressing NTDs which require affected individuals to be managed in an integrated way. In February 2018, Kenya became the 41st country out of the 47 Member States in the African Region to be certified free of Guinea worm disease. Leprosy is being eliminated as a public health problem, and Human African Trypanosomiasis is moving steadily towards elimination.

Recognizing the pivotal role, the ESPEN Partnership in playing in reducing the prevalence of NTDs and improving the overall public health systems in Africa, the United States government has just announced an additional $4 million commitment to the initiative. But even as we receive greater recognition and economic assistance from countries, donors, organizations and corporations throughout the world, it remains imperative for these entities, and particularly African nations, not only to maintain their commitment to fighting NTDs, but to increase their investments.

For every $1 we invest in fighting NTDs, $27 to $42 benefits Africa economically. If we are able to meet our 2020 goal, sub-Saharan Africa could save almost $52 billion in productivity over the next decade. By 2030, we could generate an estimated $565 billion in productivity gains worldwide. Without a doubt, investing in NTD prevention and treatment is one of the greatest best buys for health.

Achieving the Sustainable Development Goals (SDGs) simply can’t be done without eliminating NTDs. Our critical work to combat these diseases, which affect the poorest and most vulnerable among us with the least access to safe sanitation and health care, is essential to the goals of reducing poverty, ending malnutrition, improving water and sanitation, and achieving gender equality. In fact, SDG 3 specifically names NTDs as a target for eradication by 2030.

Not only must we celebrate the impressive strides we’ve made in such a short time, we must capitalize on them. We must push forward with measures such as preventive chemotherapy in the most at-risk communities. We must ensure that everyone has access to timely treatment and care, because no one should have to suffer needlessly from entirely preventable and treatable diseases. With over 1.5 billion people still needing help, including about 60 million in Africa, this is not the time to slow down. Rather, it’s time to ramp up our efforts and take advantage of this opportunity to eliminate NTDs once and for all. This would be a historic legacy of our generation.