Claiming thousands of lives every year, maternal and neonatal tetanus (MNT) is a devastating disease caused by toxins released from Clostridium tetani bacteria. With no cure, MNT is responsible for an average 110,000 deaths a year in the African Region. Once contracted, the newborn usually dies within seven days.

However, MNT is entirely preventable through appropriate immunization of women of child bearing age, and through simple and basic precautionary measures in child delivery.

Transmission occurs when there is contact between the bacteria and broken skin or dead tissues, such as the wound resulting when an infant's umbilical cord is cut.

It is estimated that fewer than 5% of neonatal tetanus cases are actually reported, even from well-developed surveillance systems. It is for this reason that the deaths are greater than the numbers indicate. Of the estimated 28 countries with highest numbers of MNT cases, 16 of them are in the African Region - accounting for 90% global neonatal tetanus cases. These are Angola, Burkina Faso, Cameroon, Chad, Cote d'Ivoire, DR Congo, Ethiopia, Ghana, Guinea Bissau, Liberia, Mali, Mauritania, Mozambique, Niger, Nigeria and Senegal.

END_OF_DOCUMENT_TOKEN_TO_BE_REPLACED 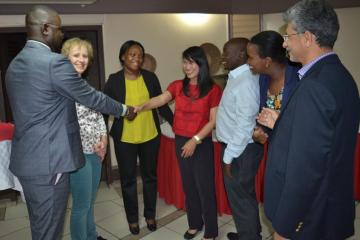