Influenza is an acute viral respiratory disease that is often characterized by fever, headache, myalgia, sore throat and cough. Influenza infection is transmitted through respiratory droplets or contact and is clinically indistinguishable from other respiratory viral diseases without laboratory confirmation.

Human influenza is caused by the influenza viruses which are classified into three main types: influenza A, B and C. Influenza A and B viruses can cause epidemic disease in humans and type C viruses usually cause a mild, cold-like illness. The natural reservoir of influenza viruses are aquatic birds and influenza can cause disease in a range of mammalian species including pigs, seals and horses.

Influenza viruses can spread rapidly around the world causing seasonal epidemics that can result in significant morbidity and mortality. In temperate climates influenza is seasonal, typically occurring every year in late autumn or winter. In tropical and subtropical regions the existence of seasonal patterns of influenza transmission are unknown and sporadic cases of influenza can occur year-round. Data describing seasonality, epidemiology, transmission patterns and disease burden from human influenza in the African Region is limited. Influenza vaccines are produced every year against seasonal influenza and offer protection for vulnerable groups in the community.

Avian influenza can also infect humans and the first cases of human infection with a highly pathogenic avian influenza (A/H5N1) were reported in 1997 in Hong Kong Special Administrative Region, China. Since 2003, sixteen countries, representing all WHO regions have reported human infections of A/H5N1 with a total of 840 cases and 447 deaths recorded. In addition to A/H5N1 an increasing number of other avian influenza A viruses are being recognised as causing sporadic infections in humans. Human disease caused by some avian viruses can be mild however certain avian viruses can cause severe disease and mortality. A number of avian influenza outbreaks have been reported in the African region resulting in the large scale death or destruction of backyard and commercial poultry, however few human cases have been reported. 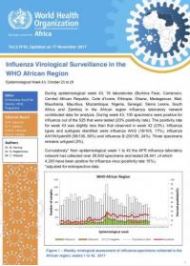 Seasonal influenza is an acute respiratory infection caused by influenza viruses which circulate in all parts of the world.

Seasonal influenza is characterized by a sudden onset of fever, cough (usually dry), headache, muscle and joint pain, severe malaise (feeling unwell), sore throat and a runny nose. The cough can be severe and can last 2 or more weeks. Most people recover from fever and other symptoms within a week without requiring medical attention. But influenza can cause severe illness or death especially in people at high risk (see below). The time from infection to illness, known as the incubation period, is about 2 days.

Yearly influenza epidemics can seriously affect all populations, but the highest risk of complications occur among pregnant women, children aged 6–59 months, the elderly, individuals with specific chronic medical conditions such as HIV/AIDS, asthma, and chronic heart or lung diseases, and health-care workers.

Seasonal influenza spreads easily, with rapid transmission in crowded areas including schools and nursing homes. When an infected person coughs or sneezes, droplets containing viruses (infectious droplets) are dispersed into the air and are spread to persons in close proximity who breathe these droplets in. The virus can also be spread by hands contaminated with influenza viruses. To prevent transmission, people should cover their mouth and nose with a tissue when coughing, and wash their hands regularly.

In temperate climates, seasonal epidemics occur mainly during winter, while in tropical regions, influenza may occur throughout the year, causing outbreaks more irregularly.

Illnesses range from mild to severe and even death. Hospitalization and death occur mainly among high-risk groups. Worldwide, these annual epidemics are estimated to result in about 3 to 5 million cases of severe illness, and about 250 000 to 500 000 deaths.

In industrialized countries most deaths associated with influenza occur among people age 65 or older. Epidemics can result in high levels of worker/school absenteeism and productivity losses. Clinics and hospitals can be overwhelmed during peak illness periods.

The most effective way to prevent the disease is vaccination. Safe and effective vaccines are available and have been used for more than 60 years. Among healthy adults, influenza vaccine provides protection, even when circulating viruses may not exactly match the vaccine viruses.

However, among the elderly, influenza vaccination may be less effective in preventing illness but reduces severity of disease and incidence of complications and deaths. Vaccination is especially important for people at higher risk of serious influenza complications, and for people who live with, or care for, high risk individuals.

WHO recommends annual vaccination for:

Antiviral drugs for influenza are available in some countries and may reduce severe complications and deaths. Ideally they need to be administered early (within 48 hours of onset of symptoms) in the disease. There are 2 classes of such medicines:

WHO, through the GISRS network, in collaboration with other partners, monitors influenza activity globally, recommends seasonal influenza vaccine compositions twice a year for the Northern and Southern hemisphere influenza seasons, and supports Member States’ efforts to develop prevention and control strategies.

WHO works to strengthen national, regional and global influenza response capacities including diagnostics, antiviral susceptibility monitoring, disease surveillance and outbreak responses, and to increase vaccine coverage among high-risk groups and prepare for the next influenza pandemic.