Most young people are thought of as healthy but many serious diseases in adulthood have their roots in adolescence.

To better address adolescent and youth health issues, several countries are developing national standards aimed at providing youth-friendly quality healthcare services and laws that require males and females to be 18 years of age or older before marriage.

Child and Adolescent Health and Nutrition

Most are healthy, but there is still substantial premature death, illness, and injury among adolescents. Illnesses can hinder their ability to grow and develop to their full potential. Alcohol or tobacco use, lack of physical activity, unprotected sex and/or exposure to violence can jeopardize not only their current health, but also their health as adults, and even the health of their future children.

Promoting healthy behaviours during adolescence, and taking steps to better protect young people from health risks are critical for the prevention of health problems in adulthood, and for countries’ future health and ability to develop and thrive.

The leading cause of death for 15– 19-year-old girls globally is complications from pregnancy and childbirth.

Some 11% of all births worldwide are to girls aged 15–19 years, and the vast majority of these births are in low- and middle-income countries. The UN Population Division puts the global adolescent birth rate in 2015 at 44 births per 1000 girls this age – country rates range from 1 to over 200 births per 1000 girls (1). This indicates a marked decrease since 1990. This decrease is reflected in a similar decline in maternal mortality rates among 15–19 year olds.

One of the specific targets of the health Sustainable Development Goal (SDG 3) is that by 2030, the world should ensure universal access to sexual and reproductive health-care services, including for family planning, information and education, and the integration of reproductive health into national strategies and programmes. To support this, a proposed indicator for the Global strategy for women’s, children’s and adolescents’ health is the adolescent birth rate.

Better access to contraceptive information and services can reduce the number of girls becoming pregnant and giving birth at too young an age. Laws that specify a minimum age of marriage at 18 and which are enforced can help.

Girls who do become pregnant need access to quality antenatal care. Where permitted by law, adolescents who opt to terminate their pregnancies should have access to safe abortion.

More than 2 million adolescents are living with HIV. Although the overall number of HIV-related deaths is down 30% since the peak in 2006 estimates suggest that HIV deaths among adolescents are rising. This increase, which has been predominantly in the WHO African Region, may reflect the fact that although more children with HIV survive into adolescence, they do not all then get the care and support they need to remain in good health and prevent transmission. In sub-Saharan Africa only 10% of young men and 15% of young women aged 15 to 24 are aware of their HIV status.

One of the specific targets of the health Sustainable Development Goal (SDG 3) is that by 2030 there should be an end to the epidemics of AIDS, tuberculosis, malaria and neglected tropical diseases, hepatitis, water-borne diseases and other communicable diseases. Given the high prevalence of HIV in many countries, to achieve this, adolescents will need to be central to control efforts.

Young people need to know how to protect themselves and must have the means to do so. This includes being able to obtain condoms to prevent sexual transmission of the virus and clean needles and syringes for those who inject drugs. Better access to HIV testing and counselling, and stronger subsequent links to HIV treatment services for those who test HIV positive, are also needed.

Thanks to improved childhood vaccination, adolescent deaths and disability from measles have fallen markedly – for example, by 90% in the African Region between 2000 and 2012. Diarrhoea and lower respiratory tract infections are estimated to be among the top 5 causes of death for 10–19 year olds. These two diseases, together with meningitis, are the top three causes of adolescent death in African low and middle-income countries (LMICs).

Building life skills in children and adolescents and providing them with psychosocial support in schools and other community settings can help promote good mental health. Programmes to help strengthen the ties between adolescents and their families are also important. If problems arise, they should be detected and managed by competent and caring health workers.

Violence is a leading cause of death in older adolescent males. Interpersonal violence represents 43% of all adolescent male deaths in LMICs in the WHO Americas Region. Globally, 1 in 10 girls under the age of 20 years report experiencing sexual violence.

Promoting nurturing relationships between parents and children early in life, providing training in life skills, and reducing access to alcohol and firearms can help to prevent injuries and deaths due to violence. Effective and empathetic care for adolescent survivors of violence and ongoing support can help deal with the physical and psychological consequences.

Harmful drinking among adolescents is a major concern in many countries. It reduces self-control and increases risky behaviours, such as unsafe sex or dangerous driving. It is a primary cause of injuries (including those due to road traffic accidents), violence (especially by a partner) and premature deaths. It can also lead to health problems in later life and affect life expectancy. Setting a minimum age for buying and consuming alcohol and regulating how alcoholic drinks are targeted at the younger market are among the strategies for reducing harmful drinking.

Drug use among 15–19 year olds is also an important global concern. Drug control may focus on reducing drug demand, drug supply, or both, and successful programmes usually include structural, community, and individual-level interventions.

Unintentional injuries are the leading cause of death and disability among adolescents. In 2015, over 115 000 adolescents died as a result of road traffic accidents. Young drivers need advice on driving safely, while laws that prohibit driving under the influence of alcohol and drugs need to be strictly enforced. Blood alcohol levels need to be set lower for teenage drivers. Graduated licences for novice drivers with zero-tolerance for drink-driving are recommended.

Drowning is also a major cause of death among adolescents – 57 000 adolescents, two-thirds of them boys, are estimated to have drowned in 2015, and teaching children and adolescents to swim is an essential intervention to prevent these deaths.

Many boys and girls in developing countries enter adolescence undernourished, making them more vulnerable to disease and early death. At the other end of the spectrum, the number of adolescents who are overweight or obese is increasing in low, middle and high-income countries.

Iron deficiency anaemia is the leading cause of years lost to death and disability in 2015. Iron and folic acid supplements are a solution that also helps to promote health before adolescents become parents. Regular deworming in areas where intestinal helminths such as hookworm are common is recommended to prevent micronutrient (including iron) deficiencies.

Developing healthy eating and exercise habits in adolescence are foundations for good health in adulthood. Reducing the marketing of foods high in saturated fats, trans-fatty acids, free sugars, or salt and providing access to healthy foods and opportunities to engage in physical activity are important for all but especially children and adolescents. Yet available survey data indicate that fewer than 1 in every 4 adolescents meets the recommended guidelines for physical activity: 60 minutes of moderate to vigorous physical activity daily.

The vast majority of people using tobacco today began doing so when they were adolescents. Prohibiting the sale of tobacco products to minors and increasing the price of tobacco products through higher taxes, banning tobacco advertising and ensuring smoke-free environments are crucial. Globally, at least 1 in 10 adolescents aged 13 to 15 years uses tobacco, although there are areas where this figure is much higher. Cigarette smoking seems to be decreasing among younger adolescents in some high-income countries.

The rights of children (people under 18 years of age) to survive, grow and develop are enshrined in international legal documents. In 2013, the Committee on the Rights of the Child (CRC), which oversees the child rights convention, published guidelines on the right of children and adolescents to the enjoyment of the highest attainable standard of health, and a General Comment on realizing the rights of children during adolescence was published in 2016. It highlights states’ obligations to recognise the special health and development needs and rights of adolescents and young people.

The Convention on the Elimination of Discrimination Against Women (CEDAW) also sets out the rights of women and girls to health and adequate health care.

In May 2017, WHO published a major report: Global Accelerated Action for the Health of Adolescents (AA-HA!): Guidance to support country implementation. The AA-HA! Guidance has drawn on inputs received during extensive consultations with Member States, United Nations agencies, adolescents and young people, civil society and other partners. It aims to assist governments in deciding what they plan to do and how they plan to do it as they respond to the health needs of adolescents in their countries. This reference document targets national-level policy-makers and programme managers to assist them in planning, implementing , monitoring and evaluation of adolescent health programmes.

Overall, WHO carries out a range of functions to improve the health of young people, including:

For some adolescents, pregnancy and childbirth are planned and wanted. In some contexts, girls may face social pressure to marry and, once married, to have children. Each year, about 15 million girls are married before the age of 18 years, and 90% of births to girls aged 15 to 19 years occur within marriage (2), (10).

Adolescents face barriers to accessing contraception including restrictive laws and policies regarding provision of contraceptive based on age or marital status, health worker bias and/or lack of willingness to acknowledge adolescents’ sexual health needs, and adolescents’ own inability to access contraceptives because of knowledge, transportation, and financial constraints. Additionally, adolescents face barriers that prevent use and/or consistent and correct use of contraception, even when adolescents are able to obtain contraceptives: pressure to have children; stigma surrounding non-marital sexual activity and/or contraceptive use; fear of side effects; lack of knowledge on correct use; and factors contributing to discontinuation (for example, hesitation to go back and seek contraceptives because of negative first experiences with health workers and health systems, changing reproductive needs, changing reproductive intentions).

In some situations, adolescent girls may be unable to refuse unwanted sex or resist coerced sex, which tends to be unprotected. Sexual violence is widespread and particularly affects adolescent girls: about 20% of girls around the world experience sexual abuse as children and adolescents (11). Inequitable gender norms and social norms that condone violence against women put girls at greater risk of unintended pregnancy.

WHO published guidelines in 2011 with the UN Population Fund (UNFPA) on preventing early pregnancies and reducing poor reproductive outcomes. These made recommendations for action that countries could take, with 6 main objectives:

WHO is also involved in a variety of joint efforts with related agencies and programmes, such as the “H4+” initiative that includes UNAIDS, UNFPA, UNICEF, UN Women and the World Bank. The H4+ aims to to accelerate progress towards achieving Millennium Development Goals 4 (reducing child mortality) and 5 (improving maternal health) by 2015. It tackles the root causes of maternal, newborn and child mortality and morbidity—among them gender inequality, child marriage and limited access to education for girls. H4+ aligns closely with national health plans and provides some financial and technical support to governments.

END_OF_DOCUMENT_TOKEN_TO_BE_REPLACED

Mon, 12/06/2017 - 11:35
African health ministers agree on priority actions towards implementation of the Global Strategy for Women’s, Children’s and Adolescents’ Health 2016–2030 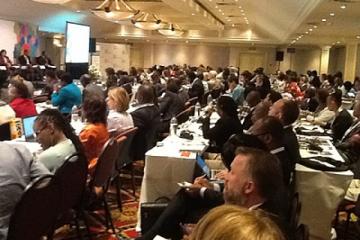