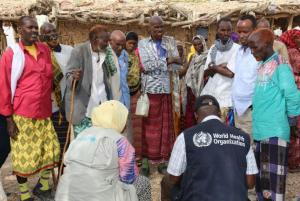 Jjiga City, Somali Region - In disease outbreak situations, rumours are as valuable as actual surveillance data. In fact, disease response teams particularly surveillance officers, attach a lot of importance on rumours and investigates them until proven wrong or right.

In several instances, disease outbreak rumours have turned out to be correct thereby contributing to early containment, reduced morbidity and mortality associated with major outbreaks. This was the case recently in Somali Region where the Government of Ethiopia, WHO and other partners are battling an outbreak of Acute Watery Diarrhea (AWD).

While the AWD response team stationed in Jijiga City, Eastern Ethiopia is now accustomed to responding to sporadic flare-ups in AWD cases in various zones of Somali region, unverified reports or rumours of 31 cases in one community were received with shock. The affected area was Danbal Woreda, in Sitti Zone about 120 kms from Jijiga city.

Having received the rumour late in the afternoon, a joint response team comprising surveillance, case management, infection control, water and sanitation and risk communication officers from the Somali Regional Health Bureau (RHB), WHO and UNICEF travelled to Danbal early the next day. Sitti Zone has a semi-mountainous terrain with difficult road transport access on gravel roads, the ride was bumpy and rough, the team arrived by mid-day. The team was received and briefed by Danbal Woreda administration about the ongoing community public health event presumed to be “dysentery” resulting from consumption of contaminated rainwater from a pond.

“This is dysentery, there is no need to worry and the situation has since returned to normal,” one officer assured the response team. Indeed if that was the case, there was no need to panic as dysentery is not a WHO notifiable disease, that is, not one of those diseases that threaten public health and containment is usually easy. However, WHO disease outbreak Standard Operating Procedures (SOP) demands that response officers must go to the source of the rumour, cross check information and ensure that nothing is actually happening there.

That meant another 45 kms of rough road through a semi-arid terrain to the Degah-ad Kabele where the suspected outbreak was reported to have occurred. The Kabele is home to a nomadic community whose major occupation seems to be cattle keeping. This area receives 223 mm of rain a year which means people are constantly on the move in search of water and pasture. For Degah-ad, the people travel 3kms to the nearest water point.

It is not surprising therefore, that when it rained on one of the days preceding 28th June 2017, people used water collected in a pond for domestic and animal consumption. Unfortunately, that water seems to have been contaminated with the germs that cause AWD given that latrine coverage in this area is almost zero and open defecation is common practice.

The history, signs and symptoms of the illness as described by the healthcare workers interviewed were found to be consistent with the national case definition for AWD. The team concluded that the cases were attributable to AWD outbreak.

In such situations, WHO standard procedures for disease outbreak containment must apply. Consequently, healthcare workers at the health post were orientated on the AWD case definition; case management and infection control measures required while providing care for AWD cases. Additionally, WHO supported the RHB to scale up support in outbreak surveillance, social mobilization, community sensitization and awareness to control further spread of the AWD outbreak.

Surveillance, which is the intelligence arm of the response has been particularly strengthened to ensure that all cases are detected and reported as soon as they occur. Staff are being repurposed to the area for this purpose and supervision and daily reporting is more vigorous and mandatory.

Risk communication that ensures constant communication between the affected communities and the authorities was also instituted immediately by identifying risk factors, power centers and influential people in this highly patriarchal community. The power centers or influencers were identified as the clan head, the religious leaders and the teacher at the Quran School that currently serves as the health post. These are not only influential in the community but they also expressed willingness to educate and change behaviours of the people for the better.

“Previously we were washing our hands after eating so that we don’t smell the food we have eaten but now we are telling everyone to wash hands before eating,” said the clan head. This and other key behaviors were endorsed as the right way to go and the influencers were requested to take the messages house-to-house in their community.

Availability of clean safe water and construction of latrines on the rocky terrain remain big challenges facing the AWD response teams in this area. But with the rumours constantly coming in and being investigated immediately, participation of the community leaders and prompt treatment of cases, many lives will definitely be saved and normalcy restored in the entire Somali Region.