Experts convene to chart a roadmap towards malaria elimination 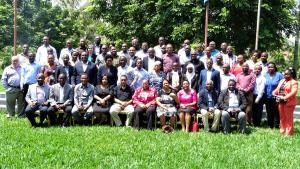 Experts convene to chart a roadmap towards malaria elimination

Bagamoyo, 2-7 September 2019: The National Malaria Control Programme in Tanzania with support from WHO and the Roll Back Malaria Partnership organized a five-day stakeholders meeting to chart out a road map towards elimination of malaria in the country.

The meeting was conducted against the back drop of the recently launched High Burden High Impact (HBHI) approach by WHO and the RBM partnership which strives to bring the malaria high burden countries on track to achieve the Global Technical Strategy for Malaria 2016 – 2030 milestones.

Tanzania is among ten African countries with the highest burden of malaria, according to the WHO World Malaria report published in 2018. In line with the current malaria strategic plan, Tanzania aims to reach zero transmission rate by next year. From 2007 progress in the prevalence of the diseases has varied from 18% in 2007, 9.5% in 2012, 14% in 2016 and 7.3% in 2017.

Other stakeholders at the meeting were the Tanzania Parliamentarians against Malaria Disease (TAPAMA) and staff from the World Health Organization.

“This is an avenue to analyze critically best practices, where we did not do well, threats and opportunities available. A good example of political will is the involvement of TAPAMA in the fight against the disease and 100 percent government funding of larval source management that the President of the United Republic of Tanzania personally directed,” said Dr. Anna Nswila, Assistant Director of Health Services in the PORALG.

As an outcome of the meeting, participants developed a roadmap highlighting key priority interventions to be implemented to advance malaria elimination in the country.