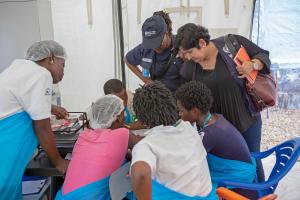 In the aftermath of Cyclone Idai, hundreds of thousands of Mozambicans were left without shelter, food or access to health services. Many people have been living in temporary settlements without access to safe water and sanitation, putting them at high risk of diseases like cholera, malaria and measles.

Under the leadership of the Ministry of Health, WHO is rolling out its early warning alert and response system (known as EWARS-in-a-Box) to rapidly detect priority epidemic-prone diseases and allow a quick response before they develop into large outbreaks.

“EWARS helps us as epidemiologists to track any reports or rumours of disease,” says Tamayi Mlanda, epidemiologist deployed by WHO to the Cyclone response in Beira, Mozambique. “This is really important for us to do in this situation because people do not have access to health care. When we can detect diseases early, it helps us to prevent them from spreading or developing into massive outbreaks.”

In Mozambique, a team of epidemiologists deployed from across the Organization, and through WHO’s Global Outbreak and Response Network (GOARN), is supporting the Ministry of Health and health partners to expand this emergency disease surveillance system to 80 sites across the areas affected by the cyclone. The system is already fully operational in four affected districts of Beira, Buzi, Dondo and Nhamatanda, with more than 30 health centres, including emergency medical teams and cholera treatment centres, reporting data daily to a central surveillance system using EWARS.

EWARS in a box is a custom-built solution designed for use in difficult field conditions, such as following a natural disaster or in a conflict. Each box contains 60 mobile phones, laptops and a local server to collect, report and manage disease data. A solar generator and solar chargers allow the phones and laptops to function without 24-hour electricity. A single kit costs approximately US$15 000 and can support surveillance for 50 fixed or mobile clinics serving roughly 500 000 people

Each health site receives a mobile phone loaded with a custom-developed disease reporting application that allows health workers to enter information when they see a patient with symptoms of one of 8 priority diseases or conditions. These are acute watery diarrhoea, acute bloody diarrhoea, cholera, measles, acute flaccid paralysis (which could indicate polio), fever, malaria and jaundice.

This information is sent immediately to a central system, where the data is used to generate real-time reports that enable a rapid response to diseases before they have time to spread.

WHO has trained over 50 epidemiologists, surveillance officers, health partners, clinicians and data managers in health centres and offices to use the EWARS system in Mozambique. All health data is now being fed into a common reporting system, thanks to strong collaboration between the Ministry of Health and partners including US Centers of Disease Control, Médecins sans Frontières, International Federation of the Red Cross and the Clinton Foundation. In particular, a team of Portuguese-speaking epidemiologists has been deployed from the ProEpi - Brazilian Field Epidemiology Professionals through the GOARN network to work closely with national staff to support this work.

“WHO has implemented EWARS in a number of emergencies – both natural disasters as well as conflict situations,” says Niluka Wijekoon who was deployed from WHO headquarters to rollout EWARS in Mozambique. “At the end of the emergency, the Ministry of Health who owns this process can exit from the emergency system and go back to its existing surveillance system. But it can keep the knowledge and the materials so that the country is better prepared for the next emergency.”

Some countries that have used EWARS in emergencies have used the training and technology they received with EWARS to strengthen their permanent disease surveillance system.