Kampala, 7th February 2019: - The World Health Organization (WHO) in collaboration with the Center for Tobacco Control in Africa (CTCA) and the Ministry of Health (MoH) has launched a study to monitor compliance with the tobacco law in Uganda. This study will strengthen WHO’s and the government's ability to report accurate and comparable data on compliance with adopted tobacco control legislation.

In Africa, Uganda and Seychelles are taking part in this pilot study along with five other countries globally. The study, sponsored by the World Health Organization (WHO), is aimed at assessing compliance with smoke-free laws and bans on tobacco advertising, promotion and sponsorship which are well-articulated in Uganda’s Tobacco Control Act 2015.

A team of data collectors has been trained and equipped on how to use the application. They will be deployed in different regions in Uganda to collect the required data on tobacco law compliance.

The WHO Representative in Uganda, Dr Yonas Tegegn Woldemariam presided over the launch which took place at the office of the Makerere University School of Public Health in Kololo. He highlighted the general exposure of adults to tobacco smoke that stands at 13.1%. He added that 20.4% of adults who work indoors are exposed to tobacco smoke and 62.3% of adults who visited bars and nightclubs face the same health hazard.

Dr Yonas further pointed out that while tobacco advertising in the mass media is considerably low, the industry still engages in covert tobacco marketing, promotion and sponsorship of sporting events. He further said that approximately seven million people die of tobacco-related diseases every year. “Of the seven million, Uganda loses 10,600 lives every year to tobacco-related diseases”, he noted.

Dr Yonas further noted that more than 10% of these deaths are due to exposure to second-hand smoke at home, workplaces and other public places.

The CTCA Country Manager, Dr Jim Arinaitwe lauded WHO for launching the initiative in Uganda. He further mentioned that, whereas a law on tobacco control was passed in Uganda, there is minimal tracking of its implementation and progress. “This study will thus inform and guide us on where to make adjustments in the tobacco response”, he stated.

Dr Arinaitwe further recognized and appreciated the support and effort from WHO in enabling countries to make great strides in tobacco control and committed CTCA’s readiness to contribute to a tobacco-free Uganda.

Dr Hafsa Sentongo Lukwata who represented the Ministry of Health at the function commended WHO and CTCA for the study noting that “It will give much-needed evidence and data for guide policy formulation and enforcement of the tobacco control Act”. She appealed to the data collectors to resist any compromise by the tobacco industry but to be patriotic and collect accurate and reliable data.

In 2015, Uganda enacted the Tobacco Control Act which bans smoking in all enclosed spaces accessible to the public such as hospitals and health centres, institutions of learning, offices, restaurants and many others. All forms of tobacco advertising, promotion, and sponsorship are also prohibited.

However, despite the existence of the law, full compliance is problematic in many spaces and the tobacco industry has continued with the covert promotion of tobacco. Therefore, the tobacco law compliance study is a timely and welcome intervention that will move the war on tobacco in Uganda, Africa and in the world to yet another level. 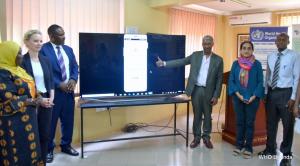