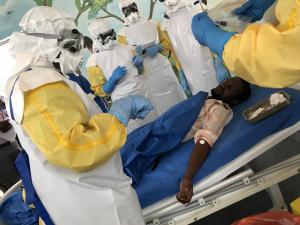 In the context of the on-going outbreak of Ebola in North Kivu and Ituri Provinces of the DRC that declared on 1st August 2018, Uganda, South Sudan and Rwanda as priority one countries based on proximity, insecurity and high population across the border, the Rwandan Ministry of Health, supported by partners has developed, and is implementing an EVD preparedness and contingency plan. The objective: strengthen preparedness capacities for the prevention, earlier detection, response and containment of a potential case of EVD in Rwanda.

The plan prioritized 10 districts bordering DRC, Uganda, as well as districts in Kigali city. Several drills and functional exercises have been conducted. The Full SIMEX exercise (FSIMEX) was organized by the Rwandan Ministry of Health and the Rwanda Biomedical Center (RBC) in collaboration with WHO Country Officer, government stakeholders and technical partners.

The exercise was conducted in two phases and deployed in the Gihundwe and Mibilizi District Hospitals and at the Kamembe airportThe Gihundwe and Mibilizi District Hospitals are located in Rusizi Distric-Western Province and the Kamembe airport, a civil facility also of the Western province, is the higher density industrial and transport center to the North. The Kamembe Airport serves the city with an estimated number of eleven flights eleven a week to the Rwandan capital Kigali. The second exercise was conducted at the Rubavu-Rugerero Ebola Treatment Center (ETC)also located in the Western Province. Its capital, Gisenyi, is Rwanda's biggest beach resort and border city.

The FSIMEX focused on testing and validating capabilities for rapid detection, rapid response, and effective coordination at national and district level, including the activation of the PHEOC/emergency coordination mechanism, in order to provide opportunities to identify areas for further improvements. The overall exercise has put gathered WHO Country Office's health partners, including the Rwanda Ministry of Health mainly in charge of policies, the Rwanda Biomedical Center (RBC) which is the implementing arm working with the Districts, the Ministry in charge of Emergency, the staff of the Public Health Emergency Operation Center (PHEOC), NGOs, international Agencies (WHO, AFRO, UNICEF, CDC, UNHCR), DIFID HQ, CDC Rwanda, the Rwandan Red Cross, the Rwanda Military Hospital, Rwanda Health Communication Center, the National Referral Laboratory and real in situ staff of the tested health facilities.

During the Full SIMEX, had a pre-determined number of tasks had to be performed by the participants in order to test the operations or functions of the emergency response, namely:

4. Case management in health facility and at ETC, IPC, disinfections and waste Management

The second exercise at the Rubavu-Rugerero Ebola Treatment Center also allowed to identify strengths to be built upon and gaps which may require remedial action. Lessons learnt during the response and feed-back from health personal involved in the simulation have been critical for all partners. The management of the bodies were thoroughly monitored by all partners, particularly donors who have been involved in the national task force of EVD preparedness and response from the beginning. Their participation to the FSIMEX will enable them to tailor and customize their future assistance. They are also expected to provide their recommendations to move forward and better address the needs for the EVD preparedness. The drills were also performed by the military hospitals which are also an essential part of the EVD preparedness and response team in Rwanda. The deliverables and the EVD preparedness check list will be completed accordingly.

Rwanda's specificity and challenges lay on the fact the country has never faced an emergency before. The whole exercise highlighted progresses and gaps in the national EVD preparedness plan. This FSIMEX exercise allowed WHO Country Office to reposition itself as the leading health agent and coordinator in Rwanda. 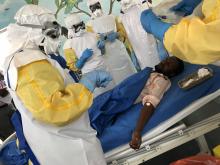 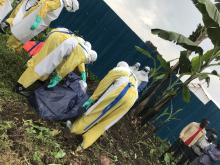 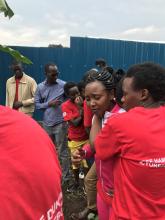