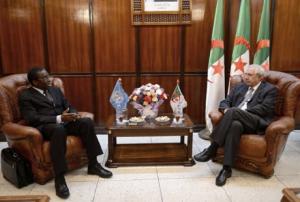 During the visit, the long-standing cooperation between the Algerian Government and WHO dating back to 1962 was upgraded with the signing of an agreement by Dr Sambo elevating the status of the WHO Liaison Office in Algeria
to a full-fledged WHO Country Office.

The Regional Director signed the host agreement with the ministry of Foreign Affairs on behalf of WHO in the presence of Algeria’s Minister of Health, Population and Hospital Reform, Dr Abdelaziz ZIARI.

Dr Sambo, later accompanied by Mr Gian Luca Burci, Legal Adviser of WHO and Dr Marion Motari, who is in charge of Governing Bodies at the Regional Office, was received by the Minister of Foreign Affairs of Algeria, Mr Mourad MEDELCI.

During the meeting, Dr Sambo expressed great satisfaction with the new era of cooperation between WHO and Algeria and discussed possible areas in which emphasis will be put in future cooperation: prevention and control of non-communicable diseases including mental health; health research; training of health workers; and improved management of health services and institutions.

The Regional Director praised the excellent work done by Mr Mamadou Mbaye, Resident Coordinator of the United Nations in Algeria, who, for three years, had been acting as the WHO Liaison Officer in Algeria.