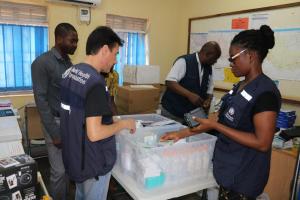 Yambio, 28 January 2019 – The Ministry of Health of South Sudan, with support from the World Health Organization (WHO), Gavi, the Vaccine Alliance, UNICEF and the US Centers for Disease Control and Prevention (CDC) and other partners, today started vaccinating health workers and other front-line responders against Ebola as part of preparedness measures to fight the spread of the disease.

Vaccination began in Yambio, Gbudue State, but health workers in Tombura, Yei and Nimule as well as the capital city, Juba, will also be offered the vaccine. These are high-risk areas bordering the Democratic Republic of the Congo (DRC), now experiencing its tenth outbreak of Ebola. The outbreak began 1 August 2018. Neighbouring countries have not reported any cases of Ebola, but preparedness is crucial.

As part of these preparedness activities, South Sudan received 2 160 doses of the Ebola vaccine (rVSV-ZEBOV) from Merck, the vaccine developer. The vaccine offers protection against the Zaire strain of the virus, which is the one affecting DRC at present.

“It is absolutely vital that we are prepared for any potential case of Ebola spreading beyond the Democratic Republic of the Congo,” said Dr Matshidiso Moeti, WHO Regional Director for Africa. “WHO is investing a huge amount of resources into preventing Ebola from spreading outside DRC and helping governments ramp up their readiness to respond should any country have a positive case of Ebola.”

Vaccination is one of a raft of preparedness measures South Sudan is putting into place. WHO has deployed more than 30 staff members to support these activities.

In particular, WHO has helped train 60 health workers in good clinical practice principles and protocol procedures to administer the yet-to-be-licensed Ebola vaccine. To detect any travellers entering the country who may be infected with the virus, the Ministry of Health, with the support of its partners, has established 17 screening points. Nearly 1 million people have been screened to date.

WHO is also supporting engagement with communities, active surveillance for the disease at the community and health facility levels, strengthening capacity for infection prevention and control and case management, and supporting dissemination of Ebola information through the media. Local laboratory capacity to test samples taken from people suspected of having Ebola is also being strengthened. Protective gear for responders has been stockpiled in a dedicated warehouse.

Gavi, the Vaccine Alliance, in addition to its work making the Ebola vaccine stockpile available, is providing US$2 million to support the WHO’s vaccination efforts in countries neighbouring the DRC, including South Sudan.

“Although research is ongoing, the evidence so far suggests the Ebola vaccine is a highly effective tool to help stop epidemics and can be used to prevent this national outbreak from becoming a regional one,” said Dr Seth Berkley, CEO of Gavi. “Vaccinating front-line workers and health workers in South Sudan border regions will be crucial: an outbreak in South Sudan would be deeply concerning.”

The yet-to-be-licensed rVSV-ZEBOV vaccine has been shown to be highly protective against the Zaire strain of the Ebola virus in a major trial. Though not yet commercially licensed, the vaccine is being provided under what is known as “compassionate use” in the ongoing Ebola outbreak in North Kivu province of DRC as part of recommendations from the Strategic Advisory Group of Experts on Immunization. This vaccine was also used in the Ebola outbreak in Equateur province of DRC in May–July 2018.