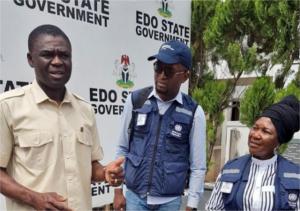 Abuja, 15 March 2018 - “When I received the confirmation of the first case of Lassa fever and request by  Nigeria Center for Disease Control to coordinate the contact tracing pillar of the outbreak, nothing prepared me for the tasks ahead other than my work in polio eradication, knowing that another responsibility beckons,”  said Mrs Faith Ireye, WHO State Coordinator in Edo state.

“The confirmation on 05 January 2018 was reminiscent of the day that the first Ebola virus was reported in 2014 and the Country office in Abuja deployed some of us to assist with contact tracing in Lagos state.”

From 01 January to 04 March 2018, a total of 1,121 suspected cases of Lassa fever have been reported in across 18 states (Edo, Ondo, Bauchi, Nasarawa, Ebonyi, Anambra, Benue, Kogi, Imo, Plateau, Lagos, Taraba, Delta, Osun, Rivers, FCT, Gombe and Ekiti).  Of these, 353 are confirmed positive, 8 are probable, 723 are negative and 37 are awaiting laboratory results. Since the onset of the 2018 outbreak, there have been 110 deaths: 78 in positive-confirmed cases, 8 in probable cases and 24 in negative cases. Case Fatality Rate in confirmed and probable cases is 23.8%.

Deputy Governor of Edo State, His Excellency Philip Shaibu said, “WHO as we all know is one of the pillars that has helped lead surveillance in Edo state. Over the years they have been supporting surveillance extensively but in this particular outbreak, WHO was even the first to draw attention to the fact that we need to galvanize resources from all partners, from other parts of the country to ensure that things get done”.

Edo state was one of the hardest hit by the outbreak that required a major response.

“Nothing prepared me more for the task than my experiences in polio eradication activities, such as surveillance, supplemental and routine immunization,” said Ms Ireye, who has worked with the Polio Eradication Initiative for over 10 years. “My experiences in polio eradication activities allowed me to immediately swing into action. So, when the outbreak was confirmed, I realized the need to use my expertise to serve communities at risk in the state.”

The polio infrastructure
Faith Ireye is one of over 2500 WHO and 390,000 ad hoc personnel supporting polio eradication in Nigeria. On several instances, polio workers have provided frontline support for outbreak response. For example, polio workers were essential to containing the Ebola virus outbreak in 2014. For the Lassa fever response, 271 are involved in active case search, 235 in contact tracing and 320 in community sensitization activities in the 18 states active states.

“The polio infrastructure was originally designed towards achieving the polio eradication goals,” said Dr Wondimagegnehu Alemu, WHO Country Representative to Nigeria. “Now polio infrastructure has expanded its support to broader disease surveillance strengthening, outbreak response and basic health care services including immunization.”
With the imminent eradication of polio globally, plans are underway to determine how best to transition polio assets including health workers to retain their knowledge and skills.

Other activities include data collation, analysis, reporting and archiving using mobile phones fashioned after the real-time tracking and reporting by polio vaccination teams. These activities fit into the polio essential functions of surveillance, outbreak response and containment that vaccine-preventable disease surveillance and laboratory networks rely on to save millions of lives threatened by diseases such as yellow fever and meningitis.

“The polio teams on ground in the states were crucial for mounting the initial response to the Lassa fever outbreak and have continued to be WHO’s frontline technical support to the NCDC, States Ministry of Health and local government area teams”, Dr Emmanuel Musa, WHO Incident Manager for Lassa fever Management Team in Nigeria observed.

A legacy for posterity
Huge investments by donors and partners have gone beyond polio eradication to saving lives and impacting positively on people’s health. WHO and other partners are currently supporting the National transition plan development to ensure these investments are not wasted, but made available to support other National public health efforts and priorities.

“We must carefully consider how we transition many of the polio workers and the polio infrastructure to help with managing other health needs,” Dr Alemu said. “Future funding and partnerships will be a key part of this work.” 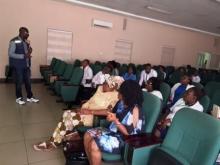