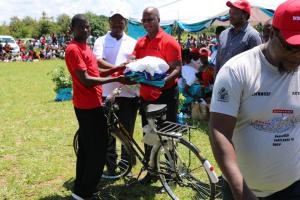 On World TB Day 2018 in Malawi the Honorable Minister of Health and Population Atupele Muluzi, MP urged Malawians to unite in the fight to end TB. He said that in Malawi one out of every 10 people has tuberculosis, a problem that requires urgent attention by everyone. Honarable Muluzi was speaking at the commemoration ceremony that took place at Khombedza community ground in Salima on 24 March under the theme: “Wanted: Leaders for a TB-free World. You can Make History. End TB.”

In his speech the honorable minister reaffirmed the Government of Malawi’s commitment to collaborate with partners to meet the expectations of the people and the global community by implementing the WHO End TB Strategy. “The WHO strategy calls for significant reduction in tuberculosis deaths and tuberculosis incidence rate. In addition, the strategy aims to end the catastrophic costs faced by families due to tuberculosis,” the minister said. He went on to state that the government was investing significantly to enhance human resources for health, diagnostics, infrastructure, drugs and supplies as well as developing and strengthening sustainable systems to support the fight against TB. “The mobile van that you see behind you has all equipment and personnel that is able to test for tuberculosis. The aim is to reach as many people in the community and therefor increase the case detection rate,” the minister said.

Speaking to the audience, the acting WHO Representative Dr Leslie Mgalula commended Malawi for the positive progress achieved this far. “Let me highlight that there are great strides in TB control and such reducing the TB/HIV co-infection rate from 77% in 2000 to the current 52%, expanding the TB diagnostic and registration sites currently at 333 and 300 respectively, increasing the uptake of ART among TB/HIV co-infected patients currently which is over 98% and also the scale up the new rapid molecular diagnostic tests such as the GeneXpert, that we saw here on the pavilion. All this is due to the commitment and hard work of men and women and women in the ministry of health and communities,” Dr Mgalula said.

At their “First Ministerial Conference on Ending TB” in Moscow in November 2017, 75 ministers from the African Region committed to end TB. Member States of the African Union finalized a Common African Position on TB (CAP-TB) on the sidelines of that historic conference. This is in the context that leaders are in a privileged position to build strong partnerships and commitment to end the TB epidemic at every level. The WHO therefore calls on government, parliamentarians and policy-makers from all sectors to drive ambitious plans that will accelerate TB control at national level.