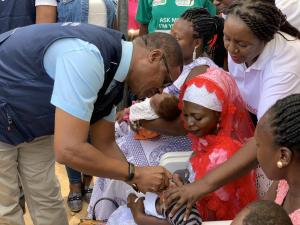 The Ghana Health Service (GHS) has launched series of vaccination campaigns against polio outbreak to prevent the spread of the virus in high risk areas among children under five.
The first phase which is termed ‘round zero’ would ensure that children in all districts in Greater Accra who are eligible, are vaccinated from September 11 to 14th.
The polio outbreak response campaign comes after the health sector confirmed three events of circulating vaccine derived polio virus type 2 (cVDPV2) from 8 July this year.
Two of the samples testing positive for cVDPV2 were from environmental surveillance : one each from Koblimagu in Tamale Metropolis (Northern Region) and Agbogbloshie in Accra Metropolis (Greater Accra Region) in July and August this year.
The third isolate was confirmed in a sample from a 2 year 9-month old girl in Chereponi District (North East Region) who developed Acute Flaccid Paralysis (AFP) in July this year.
Dr Anthony Nsiah Asare, Director General of the GHS, who launched the campaign on 11th September 2019, said teams of health workers and volunteers would move from house to house, schools, markets, lorry stations, churches and mosques to vaccinate all eligible children under 5 years.
He said there would also be fixed posts at health facilities, regular weighing centers and other designated areas during the four day vaccination period.
He said the Service intends to carry out round one of the campaign from September 25 to 28 in all districts in the Northern, North East, Savanna, Upper East and Greater Accra Regions.
“Round two, scheduled for 16-19 October this year would also cover all districts in the Northern, North East, Savanna and Upper East Regions,” he said.
The Service has according to Dr Nsiah Asare planned a nationwide vaccination campaign which would use inactivated polio vaccine (IPV), for all children born from January 2016 to June 2018 in all districts across the country later this year.
He said the vaccination was free of charge saying: “I wish to assure the general public that the vaccine is safe and effective to prevent type2 polio and protect children from the disabling and potentially deadly disease, hence the effort to encourage all parents and caregivers to ensure their children under 5 years of age are vaccinated during these exercises”.
The Director General thanked the media and all who have contributed to bring Ghana this far in the journey to eradicate polio.
Dr Owen Kaluwa, the World Health Organization (WHO) Country Representative, said it is very prudent for children in Agbogbloshie and all parts of Accra, to be vaccinated against polio; a disease that can kill or cripple infected persons for life.
“On Thursday 29 August 2019, a polio virus was identified in the Agbogbloshie environment  and this puts the live of all persons in this market and the whole of Greater Accra at risk of polio especially children who are less than 5 years old,”.
The vaccination campaign in Greater Accra Region, he said, presents an opportunity for children to be protected against this deadly disease.
Dr Kaluwa called on the media, to create awareness and generate demand for the vaccination campaign.
He said the WHO together with partners, will provide the needed support to the country to ensure the success of the effort. 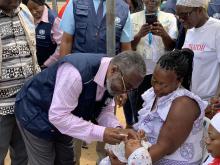