As Ebola Disease Transmission is interrupted in Kasese District, Arua goes on high alert following confirmation of a case near the border

Kampala, 6th July 2019:- All people who came into contact with the confirmed case of Ebola Virus Disease in Kasese district yesterday completed 21 days of follow up without developing the disease. This means EVD transmission from the confirmed cases from the known contacts has been interrupted in Kasese.

“At present, there is no confirmed Ebola case in Uganda and we urge all people to go about their work normally. Schools, cross border trade and other social services should continue,” said the Minister of Health Dr Jane Ruth Aceng while meeting Arua district political and civic leaders.

“However, all people especially surveillance officers, Village Health Teams (VHTs) and health workers in health facilities must remain on high alert and identify any cases that may come up,” she added.

While completion of the 21 days follow-up period is good news for the people in Kasese district, it, however, comes at a time of heightened surveillance following confirmation of an EVD case in Ariwara, Democratic Republic of Congo (DRC) only 7 km from Arua district.  Proximity and movement of the confirmed case, the porous border and the regular social-economic interaction of the people in the area are the causes of concern for all people.

“I request all Arua district leaders to re-fire up. There is death at your doorsteps and the challenge is real. The challenge in Arua is the same even for all the districts that have close interactions with our brothers and sisters in the DRC,” said Dr Aceng.

The Ministry of Health of Uganda declared an EVD outbreak in Kasese district on 11th June 2019 after detection of the disease in a five-year-old boy who had travelled with his family to DRC for burial. Two other members of his family, a grandmother and 3-year-old brother also tested positive for Ebola and both also died.

As a result of these deaths, 114 people were registered as contacts and followed up daily to monitor their health for possible support in case they developed the disease.

During the Kasese outbreak, 1,507 people - contacts to the confirmed EVD cases, contact of contacts, frontline health and other workers have been vaccinated against EVD using the ‘Ebola-rVSV’ vaccine.

As health workers worked tirelessly to contain the outbreak, several dignitaries including the WHO Regional Director for Africa Dr Matshidiso Moeti visited Kasese to assess the response which was also a motivating factor for the frontline health workers.  All visitors appreciated the work done by the District Task Force, the excellent cross-border collaboration and the community-led interventions that have been implemented to contain the spread of the disease.

It is this Kasese experience that Dr Aceng urged the leadership of Arua district to replicate. “Make the population aware of Ebola as we have done in Kasese. Ebola is real, it kills and it’s on our doorsteps.  You should be your brother or sister’s keeper,” she said.

The WHO Country Representative Dr Yonas Tegegen Woldemariam applauded the government of Uganda’s openness on declaration and management of disease outbreaks which has become a global benchmark.

“Please strengthen surveillance, coordination and accountability in your preparedness and possible response to EVD,” he appealed.

The EVD outbreak that occurred in Kasese offered one big lesson which Arua and other districts in Uganda will surely learn from: it is district leadership, community engagement, effective surveillance, vaccination, early detection and evacuation of cases to treatment units and safe and dignified burial that are the real game changers in EVD response. 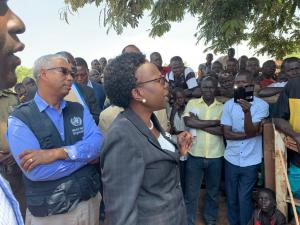