Bauchi, 7 July 2019 - The Bauchi State Governor, His Excellency, Senator Bala Mohammed has expressed a desire for a stronger and sustained collaboration with World Health Organization and over 20 other International Development Partners and Donor Agencies working in the state.

The Governor disclosed this while speaking at the opening of a joint meeting between the Executive Council and Development Partners at Bauchi Government House and said that his administration has a blueprint and wants to collaborate with all Development Partners to actualize the vision therein. “We are not asking you to cut corners but to tell us how to do it quickly and efficiently”, he said.

Describing the State as having one of the weakest health systems in the country, Senator Mohammed expressed optimism that with the support of WHO and other partner agencies, he intends to “move Bauchi from one of the poorest states in the country to the best 5 within the next 4 years.”

To achieve this laudable goal, the governor revealed that he has set up a multilateral desk domiciled in his office with the sole objective of strengthening collaboration with Development Partners. He said, “Bauchi State is ready to tailor its priorities to achieve tangible results. You are here to make a difference and I want to make a difference for my state too”.

The Governor also disclosed that the population of the State has grown rapidly from 5.8 to almost 7 million due to the raging insurgency in the Northeast. The influx of displaced persons from Borno and Yobe who consider Bauchi as a safe haven, has overstretched existing infrastructure to the limit. “I call on WHO and other partner agencies in the state to support us in rebuilding our health infrastructure and the capacity of our health workers”, the Governor said

WHO support to Bauchi State
Briefing the Governor, the WHO State Coordinator (SC), Dr Adamu Ibrahim Ningi outlined the general functions, mission and scope of WHO support to the Bauchi, which include a robust infrastructure for polio eradication and immunization that is facilitating  health system strengthening as well as malaria, Tuberculosis, Leprosy project and disease outbreak response.

According to Dr Ningi, WHO has been supporting Bauchi in the health sector and gave a breakdown of the financial implications of some of support provided by donors through WHO. Furthermore, WHO is supporting strengthening of the health system in the areas of capacity building, accreditation of the State School of Nursing and Midwifery and provision of two buses among others.

‘Adhering to the Abuja Commitment’
The SC also highlighted the importance of adhering to the ‘Abuja Commitment’ expectations and indicators to the Governor. Among others, the personal involvement of state governors in support of polio eradication and routine immunization (RI) is one of the indicators being tracked.
In response to the prayer, the governor demanded to know the polio status and routine immunization performance to which Dr Ningi explained that the state has not reported wild poliovirus nor circulating Vaccine Derived Poliovirus in humans for over 63 months and 76 months respectively.

However, the state has continued to pick viruses through its environmental surveillance mainly in Bauchi LGA. With regards to RI, the SC explained Bauchi is making progress towards improvement in quality of immunization services based on the results of the quarterly RI Lot Quality Assurance Surveys (LQAS).

Bauchi Deputy Governor, Speaker and Deputy Speaker of the State House of Assembly, Secretary to Government, Permanent Secretaries and over 20 development and donor agencies, also attended the meeting. 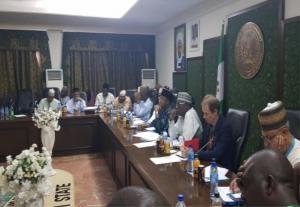