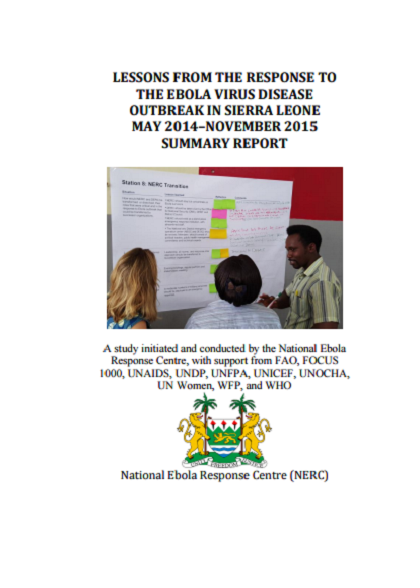 The first case of Ebola Virus Disease (EVD) in Sierra Leone was reported on 25 May 2014 in Kailahun district which borders with Liberia and Guinea. The deadly outbreak swept the country in the following months and by 7 November 2015 when the outbreak was declared over by the World Health Organization, the Ministry of Health and Sanitation recorded a total of 3,589 confirmed deaths and 4,051 survivors.

This report presents the outcome of a nationwide lessons learned exercise led by the NERC, in collaboration with 2 the United Nations (UN) in Sierra Leone and FOCUS 1000, a Sierra Leonean NGO, from September to December 2015. The significance of the lessons from Sierra Leone’s experience in responding to the EVD outbreak extend beyond strengthening public health emergency management or disaster management in this country.