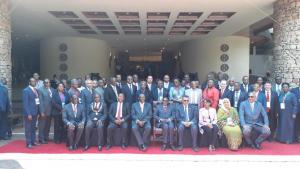 Victoria Falls, Zimbabwe, 28 August 2017 - The significant progress in improving people’s health in Africa has been commended by delegates attending the 67th session WHO Regional Committee for Africa, which began today in Victoria Falls, Zimbabwe. This follows the presentation of the 2016-2017 Biennial Report on the Work of WHO in the African Region by Dr Matshidiso Moeti, the WHO Regional Director for Africa. The report highlights progress achieved during the past biennuim in the Region in emergency preparedness and response, elimination of priority diseases including HIV, TB, malaria; tackling non-communicable diseases, progress in protecting children from illness and deaths, among others.

In her presentation, the Regional Director commended partners and Member States for their support and concrete actions respectively which have contributed towards the progress during that past 18 months.

She said:” WHO in the African Region is committed to working with its Member States and partners to deliver results that transform the health of all Africa’s people through universal health coverage for achieving the Sustainable Development Goals (SDGs)”.

During the reporting period, WHO’s reforms in health security including the establishment of the Incident Management System led to effective coordination and deployment of over 2500 experts in 2016 to respond to over 150 public health events including outbreaks such as meningitis, Lassa fever and cholera, as well as the health effects of drought, floods and food insecurity. In 2016, WHO together with Ministries of Health and partners in Angola and the Democratic Republic of the Congo (DRC), vaccinated over 30 million people in a matter of months, to end the largest ever yellow fever outbreak. Within 48 hours of being notified of the Ebola outbreak in the Likati zone in DR Congo,  WHO worked with the country and partners to effectively respond which led to the outbreak being brought to an end within two months.

The report also describes continuing efforts by WHO Secretariat and its member countries to eliminate and eradicate priority diseases. The implementation of the ‘Treat All’ recommendations for HIV-positive patients has resulted in the expansion of ART coverage, with 13.8 million individuals now receiving ART in the African Region. This contributed to the reduction of HIV-related deaths to about 720 000 in 2016, compared to 800 000 in 2015.

In July 2016, the Region, celebrated success in controlling river blindness after more than 40 years of sustained effort. Togo is the first country in the African Region to achieve WHO’s validation of elimination of lymphatic filariasis as a public health problem. To ensure that Africa is polio-free by 2019, over 190000 polio vaccinators immunized more than 116 million under-five children in 13 countries in West and Central Africa.

Dr Moeti drew attention to the urgent need to address Antimicrobial resistance as it has serious implications for treatment failure, rising costs and increased disease burden. In recognition of this, WHO is supporting 44 countries to develop National Action Plans (NAPs) to tackle antimicrobial resistance. To address the growing problem of drug-resistant TB in Africa, WHO worked with countries to improve diagnostic capacities of TB laboratory services. Multidrug-resistant tuberculosis (MDR-TB) treatment programmes have been established in 40 of the 44 countries that have ever reported a case of MDR-TB. To improve treatment outcomes, 11 countries from the Region worked with WHO and other partners to pilot short treatment regimens for MDR-TB from ­24 to between 9-12 months.

In the area of health system strengthening, WHO organized the first Regional Forum on Health Systems Strengthening for the SDGs and UHC, in Windhoek, Namibia in December 2016 where a   framework to guide countries to build resilient health systems was adopted. Countries were supported to produce National Health Accounts which enable them to make effective decisions on fairer financing strategies. The Organization also conducted national health workforce accounts to generate data to guide the improvement of human resources for health policies; improving access to essential medicines, building regulatory capacity in countries and strengthening vital statistics and health information systems.

The biennium saw remarkable progress in protecting children from illness and deaths. WHO and partners supported the inclusion of pneumococcal conjugate and rotavirus vaccines in the national routine immunization schedules of 38 and 31countries respectively. The RTS,S vaccine, which has demonstrated partial protection against the malaria parasite plasmodium falciparum in young children, will be piloted in Kenya, Malawi and Ghana in ­2018 and is expected to contribute to reducing child deaths.

The Regional Director observed that while national immunization coverage rates are high in many countries, one in five children still does not have access to all the vaccines they need. Inequities persist, with major coverage gaps associated with household income and mothers’ education. It is expected that as African Heads of State have endorsed the Addis Declaration on Immunization (ADI) at the African Union Summit in January 2017, this political commitment into action in countries.

Other developments detailed in the report include the capacity building of 11 affected countries in Southern and Eastern Africa to plan and respond appropriately to the health impacts of El Niño-induced extreme climate events. WHO/AFRO coordinates the Clim-Health Africa Network, a virtual hub of international partners who share expertise and information to strengthen resilience in African countries.

Products, with 10 countries out of 27 in the world which have ratified the Protocol. In this reporting period, eight more countries ratified the Protocol following intense technical support and capacity building by WHO AFRO. WHO has supported countries to conduct STEPwise surveys to monitor trends in the main risk factors for NCDs, in order to guide action.

Efforts to transform the WHO Secretariat in the African region to make it fit for purpose continue to gain momentum.  The number of overdue donor reports (DFC) dropped by 22% between May 2016 and May 2017. Efforts to improve compliance with business rules are starting to show results - unsatisfactory audit reports were reduced to 0% (zero percent) in 2016, compared to 50% 90% in previous years. All the new audits in 2016 were either fully or partially satisfactory. In April 2017, an independent evaluation of the first two years (2015-­2016) of the reform programme  (Transformation Agenda) reaffirmed the significant progress made in accountability, compliance and risk management, strategic partnerships, and improved donor grant management.

According to the report, the first ever Africa Health Forum, organized by WHO in Kigali, Rwanda in June 2017, under the theme: “Putting People First: The Road to Universal Health Coverage in Africa,” has set the stage as a biennial platform for government ministers, international agencies, youth and the private sector to discuss public health challenges and opportunities in the Region through the lens of universal health coverage.