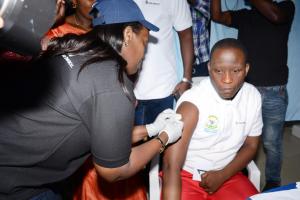 On 8th of December 2019, Rwanda and Democratic Republic of Congo launched jointly a vaccination campaign for Ebola prevention named Johnson and Johnson Vaccine(J&J). This important event was a big progress in Ebola Disease fighting in a joint cross-border manner between DRC and Rwanda, the first ever cross border vaccination of Ebola Disease Virus. The event took place in Rubavu District, at “La Grande Barriere” border.

The ceremony was co-chaired by the Ministry of Health, Dr Diane Gashumba and the Ebola Response Coordinator in DRC, Professor Muyembe Tamfoum. Were also present high-level guests from the two countries and Partners. Among them, on DRC side, the Vice Governor of North Kivu Province, the Provincial Minister of Health of North Kivu. Partners were represented by WHO Assistant Director General for Emergencies, Dr Soce Fall; WHO Representative for Rwanda, Dr Kasonde Mwinga; DIFD representatives and J&J Team; Also on Rwanda side, were present the Mayor of Rubavu District; Security Services; Local Authorities and Community Health Workers in charge of community mobilization and engagement.

Outbreaks of the deadly Ebola virus diseases have been killing thousands of people since they were diagnosed in 1976.
The 2014–2016 outbreak in West Africa was the largest Ebola outbreak since the virus was first discovered in 1976. The current outbreak in eastern DRC is highly complex, with insecurity adversely affecting public health response activities.
As of 4th December 2019, 3313 cases were reported in DRC with 2203 deaths and 1084 survivals. Major factors are hampering the control efforts of the outbreak including the security incidents that have dramatically affected the ability to identify, follow up and successfully vaccinate the contacts.

It was evidenced that the outbreak of Ebola could be easily controlled by vaccines and since, many candidates of vaccines have been in development pipeline. Fortunately, one vaccine has reached the WHO prequalification and can be made available for the population at risk. The rVSV-ZEBOV-GP vaccine is being used in the ongoing Ebola outbreak in DRC. The vaccine, produced by MERCK, is being used in a ring vaccination strategy: vaccinating contacts and contact of contacts to prevent the spread of the disease. The European Commission awarded recently to this vaccine a commercialization permit, which will allow manufacturers to produce quantities of the vaccine in the near future.
Although these important steps in fighting Ebola was reached, efforts are still needed to ensure that additional vaccines are available and accessible   to prevent the expansion of the outbreak and protect the populations before outbreaks spreads to the areas at risk.  It is in this regard that recently, WHO supported introduction of a second vaccine, the Johnson & Johnson (J&J) investigational vaccine to help combat the Ebola outbreak in DRC. This vaccine is given in 2-doses, 56 days apart. Vaccinations will be provided particularly to mobile populations that trade and cross daily between and Rwanda. J&J vaccine provided under approved protocols to at-risk populations in areas that do not have active Ebola transmission as an additional tool to extend protection against the virus. This will support to   increase the resilience to the spread of the Ebola diseases and prevent the transmission of EVD in the community at risk.

The Government of Rwanda in collaboration with WHO and other partners, has been implementing public health measures to protect its population against Ebola Virus disease. Vaccination was one of the measures taken to protect health care and frontline workers in the districts at high risk of Ebola. Overall, 2874 HCWs and Frontline Workers from the highest risk districts were vaccinated.
The Minister of Health of Rwanda, Dr Diane, urged populations, especially cross-border populations, to always “wash hands” as the first measure of EVD protection.

“WHO commended these joint efforts between DRC and Rwanda to tackle this disease and committed to continue providing whatever support needed to prevent the transmission of EVD in countries affected by Ebola Virus Disease in collaboration with other partners”, said Dr Soce, ADG WHO.

The World Health Organization will also continue to support in one way or another the development new innovations and initiatives in the fight of emerging and reemerging diseases, to ensure to everybody an enjoyable life and wellbeing.
Together let us prevent Ebola and make it a history!!! 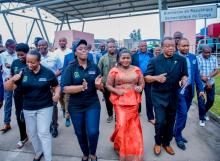 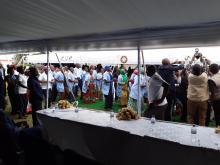 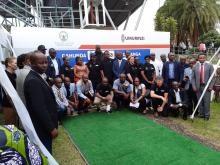