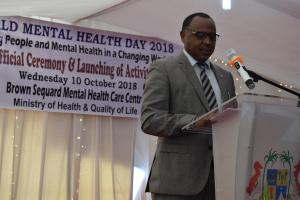 The World Mental Health Day was marked on 10 October 2018 at the Brown Sequard Mental Health Care Centre in Mauritius in the presence of Dr Hon Anwar Husnoo, Minister of Health and Quality of Life, Dr Myriam Timol, Acting Director General Public Health Services, Dr Laurent Musango, WHO Representative in Mauritius, Dr Nawoor, Regional Director of Jeetoo Hospital and Dr Ameenah Soreefan, Consultant in Charge (Psychiatry).  The quality of the cultural programme presented by the patients and staff of the Mental Health Care Centre as well as the exhibition cum sale of creative handmade crafts of the patients from the Occupational Therapy Department captured the attention and interest of all those present.

Dr Hon. A. Husnoo, in his address, explained that ‘mental health is a state of wellbeing that we need to have in order to operate in our daily life, it enables us to do things, work and contribute to the society’.   He pointed out that there is no health in the absence of mental health.  The Health Minister added that people should change their attitudes towards people suffering from mental health problems.  He added that ‘very often, mental health problems are associated with changes in society, changes in work conditions, discrimination towards women, social exclusion, unhealthy lifestyle, violence, diseases, drug or alcohol  addiction and unemployment.’

Much emphasis was laid by the Health Minister on the theme this year which is ‘Young people and mental health in a changing world’.  He said that ‘the world is changing rapidly with technology which has both positive and negative impacts on young people.’  Dr Husnoo spoke about cyber-bullying which can be the cause of depression or suicide among young people nowadays.  He added that young people are living in a world where there are conflicts, war, violence and geo-political changes.  These factors can definitely impact on their mental health

According to the World Health Organization, one out of four people will be affected by one mental or neurological problem during his or her lifetime.  It is to be recalled that 20% of children and adolescents suffer from mental disorders in the world and one out of two mental illnesses begins by the age of 14 years but unfortunately, most cases go undetected and untreated, with serious long-term consequences for mental health.

In Mauritius in 2017, among 492 young people aged below 18 years that were examined for the first time at the Mental Health Care Centre, 13% of them were due to drug addiction while 7% was caused by depression.  It is to be noted that 7% of the total number of admissions in 2017 was in Adolescents Ward.  A total of 1000 young people aged up to 23 years were admitted in regional hospitals and the Mental Health Care Centre in 2017 due to complications related to consumption of synthetic drugs.

In view of fighting drug problems in the country, the Government of Mauritius has taken several measures, including the recent inauguration of a centre for rehabilitation of young people who are addicted to synthetic drugs.  Resources are also being deployed in view of strengthening the prevention programme so that all students are sensitized on the dangers of drugs.  Other activities including awareness campaigns in the community on suicide prevention, alcohol abuse, drugs and violence are also conducted on an ongoing basis.

Dr Laurent Musango, WHO Representative in Mauritius, in his speech, highlighted that health is defined by the World Health Organization as a 'state of physical, mental and social well being and not merely the absence of diseases.'   He pointed out that 5% of young people under 15 years old suffer from mental problems in the African region. ‘Suicide is the second cause of death among young people aged 15 to 29 year old’, he added.  The WHO Representative in Mauritius emphasized on the negative impact of the expanding online technologies which are exerting additional pressure on young people who are more and more feeling the need to be constantly connected.

‘The harmful use of alcohol and illicit drugs among adolescents contributes to risky behaviours such as violence, unsafe sex and dangerous driving’ pointed out Dr L. Musango.  He highlighted that children with mental disorders often face the stigmatization and limited access to health care and education, in violation of human rights.

‘I really appreciate the dance, yoga demonstration and sketches performed by the patients of the Brown Sequard Mental Health Care Centre.  I encourage them to continue expressing their talents.  This is one of the ways that we can promote mental health and fight every day stress and anxiety’, added Dr Musango.  Such activities, he said, should be promoted among young people to prevent them from indulging in unsafe activities like smoking, alcohol and illicit drug.