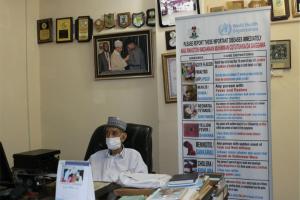 Abuja, 2 October, 2020 - Today Nigeria is polio-free but the country’s battle with wild polio virus has been long and complex. There have been numerous setbacks along the way to achieving wild poliovirus free status and extraordinary efforts and investments have been made to reach this goal.

In 2003, five northern Nigeria states boycotted the oral polio vaccine due to fears that it was unsafe. 90-year-old Professor Umaru Shehu was one of the legions of health experts and leaders who took up the challenge of ensuring that children were fully protected from lifelong paralysis.

A Professor Emeritus in Public Health, Medical Doctor, Administrator, past WHO Country Representative and consultant, Professor Shehu was invited to wade in to avert the worrisome misconception about the polio vaccine. As a specialist with over 40 years of experience in disease prevention and eradication, he was one of the northern experts who certified the Oral Polio Vaccine 'safe and effective'.

As a result of his determination, Nigeria now celebrates the victory over the wild poliomyelitis virus. Here, Professor Shehu recounts his experience during the polio eradication journey.

I can rarely start talking about polio vaccination without recalling my participation in the smallpox eradication campaign. Smallpox was officially declared eradicated globally in 1980.

In 1989, the WHO Regional Committee for Africa adopted WHA resolution and endorsed the goal of polio eradication on the continent. At that time, many children were devastated by this debilitating disease. Many children were devastated by this debilitating disease. It was a great challenge that had to be tackled. On my part, I participated in the polio-eradication activities as a Polio Eradication Ambassador due to the misconception of the polio vaccine. The misunderstanding had created apprehension among some religious groups that the vaccine had antifertility agents which were against the tenets of the religion.

The rumours and non-compliance with immunisation activities were fuelled and festered by a combination of factors and circumstances which was compounded by a group of religious leaders, the Jammatul Nasril Islam (JNI), some Islamic sects such as the Boko Haram (BH) which had disabused the minds of many parents quoting wrong information about polio vaccination across the country.

The problem was compounded by some religious leaders and academicians who were engaged to correct the misconceptions but were also against the polio-vaccination. They gave credence to anti-vaccine campaigners who linked polio vaccines with birth control mechanisms against the growing population of developing countries.

At that stage, I had to ensure that surveillance was strengthened to improve search for cases. I had to jump into the wagon of leadership and spearhead the fight against polio through interfacing with the religious and traditional leaders as well as the mass media. The role I played reversed the false impression about polio-vaccine being used as a birth control mechanism.

The World Health Organisation headquarters in Geneva had tasked me with the responsibility of coming in to solve these problems. The key to solving the problem then was to use indigenes to intervene and find solutions.

Aside from the important task of resolving the non-compliance issue, training of staff on vaccine administration, cold chain management supervision, monitoring of teams were additional tasks added to my terms of reference.

Another challenge we had to combat was convincing parents to present their children for vaccination. Some parents went to the extent of denying the presence of children in their households to avoid vaccination. We had to go from door to door convincing parents on the importance of vaccines and also employed the help of some parents as community influencers to speak with other parents.

I had to give many talk sessions to the members of the Jammatul Nasril Islam (JNI) to disabuse their minds of all the bad stuff about polio vaccination across the countries. I had to directly interface with the leaders of the Boko haram sect as they had confidence in me as an unbiased medical professional. The leader of the Boko Haram sect had earlier said he believed in Professor Umaru Shehu as a person.

It was a daunting task as it was tied up with a religious belief that the vaccine has to do with population control. To change their mindset about polio-vaccine, we had to give a descriptive analysis of how vaccines were used in other parts of the world without it harming their population.

A lot of effort was made to make the different groups see the picture of the polio burden across the world.  I drew maps that showed the whole world ravaged by poliovirus and how the virus was eradicated in the developed nations over time using the polio vaccine.

We understood that education at the lowest level was necessary. We had to take to the streets, running after families and parents to educate them in favour of vaccination. We worked hard giving examples and illustrations to the safety and efficacy of polio vaccine.

Legacy of a hard-fought battle

Back then, many people did not understand the importance and benefits of global efforts to rid the world of polio. A polio-free country means that children born in Nigeria will be more able-bodied and fit to achieve a means of livelihood. Such healthy children will grow up and be beneficial to others and the country at large.

Education will be undemanding for healthy children, this would increase the workforce and productivity in the country. Nigeria will also be able to channel the saved funds into other sectors for development.

Now wild poliovirus in Nigeria is non-existent. The eradication has worked the magic. The legacy that is left in terms of polio infrastructure can still be useful to citizens of the country. The network should not be allowed to disappear. From experience, the legacy left can be found very useful in the future, who knows?

The Global Polio Eradication Initiative (GPEI) and other partners have made huge contributions that were very beneficial to the nation in terms of supplies, education, training, materials, developing new methods of dealing with human behaviour and other types of support.

The partnership is crucial in the fight against diseases. Most importantly, they have helped us successfully combat polio. If there is any danger to health and happiness, there has to be a change in human behaviour to address the problem.