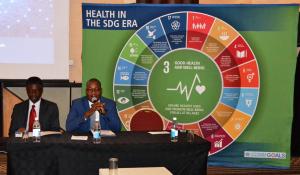 Country Context
Namibia is situated in the south-western part of Africa bordered by Angola in the north, Zambia and Zimbabwe in the northeast, Botswana to the east, South Africa in the south, and the Atlantic Ocean to the west.  It is the thirty-fourth largest country in the world occupying an area of 824,292 km2 and the least densely populated country second to Mongolia.  Ninety two percent of the land area is defined as hyper-arid, arid or semi-arid. The county is also characterized by a high income inequality with a Gini coefficient of 0.572.

National health outbreaks
Annually the WHO African region reports over 100 public health emergencies of which 78% results from infectious diseases, 17% are caused by climatic changes and 5 % from others causes, including humanitarian crises.   In recent history, Namibia has documented a number of diseases outbreaks in humans and animals.  Amongst these outbreaks is the protracted Hepatitis E virus outbreak which claimed 56 lives of which 41% are maternal deaths.  Between 2009 and 2014, the country reported measles outbreaks affecting mostly children due to low immunization coverage in the north western and central regions.  Other reported outbreaks include the polio outbreak in 2006 with 19 confirmed polio cases, pandemic influenza H1N1 2009 with 72 confirmed cases and 1 death.

Crimean-Congo Haemorrhagic Fever (CCHF) outbreaks have been documented in Namibia since 1986. In 2019, two CCHF outbreaks were reported; one in Onandjokwe district, Oshikoto region and the other in Omusati region. Anthrax outbreaks both in humans and animals have been reoccurring. The country is currently in a state of emergency dealing with a protracted drought affecting people’s livelihoods and posing various public health risks.

The National Action Plan for Health Security
As signatory to the International Health Regulations (IHR 2005), Namibia is required to develop and maintain basic national core capacities to prevent, detect, assess, report, and respond to public health threats.  The country extended an invitation to the World Health Organization in 2016 to conduct the Joint External Evaluation (JEE) to assess the country’s core capacities for prevention, preparedness and response to any health security incidence.  In response to the JEE recommendation the country developed its all hazards multi-sectoral National Action Plan on Health Security to address the gaps identified during the JEE.

Speaking at the same occasion, WHO Representative, Dr. Charles Sagoe-Moses, stressed the importance of investing in preparedness to ensure universal health coverage in health security.  He further said that there is need to build resilient health systems and better capacities to prevent, detect and respond to health emergencies.

WHO will continue to provide support to the Ministry of Health and Social Service to ensure the implementation of the health security plan and build strategic partnership with stakeholders.  The meeting was attended by UN Agencies, bilateral and multi-lateral organizations including ambassadors from different Embassies. 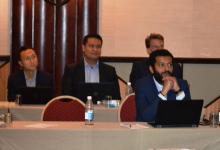