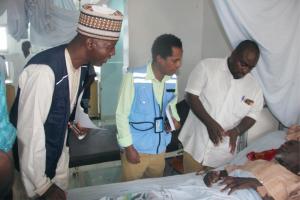 Maiduguri, 3 September, 2019 - Bukar Mustapha, 60, has been displaced from his ancestral home in Kukawa since 2015. He  has been living with infection of the appendix for the past four years in Teachers’ village IDP camp in Borno state.

“I had always catered for myself and family despite my health challenges until I became internally displaced,” laments Bukar. “As an IDP for more than four years, to wish for anything beyond daily bread is like asking for the impossible. It still sounds like a dream that I was picked up in an ambulance, brought to this Specialist Hospital and had an appendicectomy at no cost to me.”

Similarly, following an attack on his village in Gwoza Local Government Area (LGA), Borno State, Mohammed Mustapha, 34, had lived with a chronic leg ulcer in Bakassi IDPs camp since February 2018. “Although, I have survived this leg ulcer for three years, my situation deteriorated since I became internally displaced, lost my job and could no longer afford to pay for my medications. Thanks to the government and WHO for this free treatment.”

Bukar and Mohammed are two out of millions of persons displaced by conflict in Northeast Nigeria and needed urgent healthcare. With funding support from the Nigeria Humanitarian Fund (NHF) managed by Office for the Coordination of Humanitarian Affairs (OCHA), WHO has supported the referral and treatment of more than 100 patients through support for referral services in Jere, Maiduguri Metropolitan Council and Monguno LGAs.

The WHO- NHF is one of the funding mechanisms that aims at providing essential secondary and tertiary healthcare services to conflict affected people in Borno, by strengthening referral mechanisms and medical evacuation of patients/persons, injured from primary to secondary level of health care. Through the intervention, WHO has also paid for treatment of referred patients in various hospitals.

“Beneficiaries of this intervention are now able to receive critically-needed secondary care in a timely manner which significantly contributes to reducing excess morbidity and mortality and preventing disability while contributing to the overall health and wellbeing of IDPs affected by the current conflict and displacement in north-east Nigeria,” says Dr. Clement Peter, Officer-in-Charge, WHO Nigeria.

In addition to referral and treatment of patients for secondary and tertiary care, the NHF is also supporting WHO in strengthening diseases surveillance and outbreak response. Currently, WHO has engaged 60 community health volunteers who are conducting house-to-house sensitization on public health diseases as well as searching for suspected cases of acute watery diarrhea, measles, polio, meningitis, and yellow fever among others. So far, the teams have reached more than 30,000 people with preventive messages on disease prevention.

The Nigeria Humanitarian Fund is a country-based pooled fund (CBPF), managed by the UN OCHA, in support of life-saving humanitarian and recovery operations in Nigeria.