Searching for polio in unusual places in Tanzania 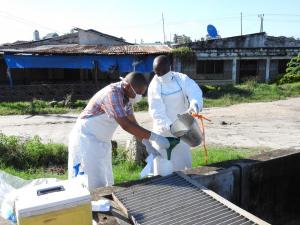 Searching for polio in unusual places in Tanzania

“I have been a sewerage operator for more than 20 years now,” says Fundi Mzee, smiling as he leaves his office at the Dar es Salaam Water and Sewerage Authority premises for his weekly hunting expedition for polio.

“I never thought such a harmful virus could be hiding in the waste waters that I deal with every day,” he explains. “Such work requires a good understanding of wastewater networks and mechanics. A typical day for me involves routine maintenance and cleaning of public sewers, plus dealing with any blockages.”

For his hunt, Mzee is loaded down with a protective gown, apron, gloves, boots, face mask, sample containers, a bucket with a rope and a cool box.

He is one of 12 sample collectors recently trained by the World Health Organization (WHO) to conduct polio environmental surveillance in four sites in Dar es Salaam, the largest city, industrial centre and commercial port on the United Republic of Tanzania’s Indian Ocean coast.

As the Africa region begins the last step towards being declared free of wild polio, the surveillance of such unusual polio hunters as Mzee and his colleagues are exceptionally critical. It has been three years since the last case was detected in Nigeria, and if no evidence of polio is found in the coming months, the 47 countries of the WHO Africa region will be certified wild polio-free.

Making sure that the wild and other strains of the virus are not lurking is part of the massively concerted lengths that governments and WHO are going to finally eradicate the disease. Finding poliovirus in sewage indicates the virus is circulating among the local population even though no actual cases have yet been reported. It is a proactive means to indicate where immunity might be weak and where immunization activities should be strengthened.

Immunizing every child is the most effective way to guard against a polio outbreak. Due to its sustained high coverage of oral polio vaccines, Tanzania has not detected a polio case since 1996.

But the country is not taking any chances.

In late April, the Ministry of Health introduced environmental surveillance as an innovative way to search for the polio virus in samples collected from sewage. Previously, the country used acute flaccid paralysis surveillance for rapidly detecting the presence of polio. Such surveillance relies on the clinical presentation of a polio case, from which a sample is taken and investigated to confirm if the paralysis is caused by the poliovirus.

Polio typically enters the body through the mouth and multiplies in the stomach. It spreads from person to person by contact with infected faeces. The disease therefore, is usually diagnosed by finding the virus in faeces.

Surveillance is thus essential to polio eradication. It can help tell where the polio virus is circulating and who is being affected. Surveillance is conducted for acute flaccid paralysis, which is the main symptom of polio.

At a randomly selected drain in a residential neighbourhood located in the outskirts of Dar es Salaam, Mzee dons his protective gear. “Personal safety is key when collecting samples – this was emphasized a lot during the training. Gloves, boots and masks must be worn and removed properly.”

He sets up the sample collection containers and dips the bucket into the sewage drain to fetch a sample. “As you can see in our settings, wastewater runs in a very unstructured manner,” he explains. “It is very common to find wastewater from homes draining openly into the public sewer. Open drains are the unusual but perfect sites to collect samples, but you must be sure you know wastewater drainage networks very well. And this is where we come in – because I can locate the number of households that drain into a selected site.”

“This is important because in case the samples turn out to be positive with poliovirus, the health authorities will be able to intervene in a timely manner,” he adds.

He meticulously pours the sample into a sealable container and labels it ready for transporting to the lab. He then washes his hands thoroughly before driving off with the sample.

“My work here is done, but it is not the end of the story,” Mzee says. “After two or three weeks, I will know the outcome of this sample. I always pray that no poliovirus is detected because now I know that polio is a serious disease.”

WHO has been instrumental in helping countries put in place robust surveillance systems that can detect the poliovirus before it widely spreads. With funding from the United States Agency for International Development, WHO Tanzania trained the sample collectors and helped organize sample transportation and testing.

A year ago, Mzee never thought he’d be among the thousands of frontline workers in the fight to kick polio out of the region. “I remember when I was approached to take part in the training – I couldn’t imagine a sewerage operator being involved in a health undertaking such as this one! I had heard of polio before but did not know how serious it can be until I received the training.” 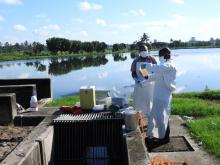 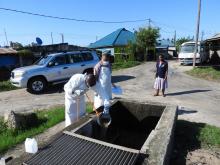