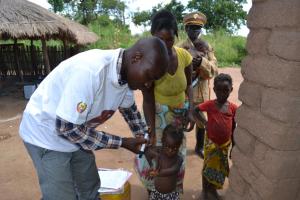 Quelimane, Mozambique - When cyclone Idai struck the world’s southern hemisphere in March, Mozambique was hit the hardest - and it came on top of an outbreak the country was already dealing with - polio was diagnosed by the health authorities in Zambézia province at the heart of the country on 5 December 2018.

As WHO and partner responders rushed to provide treatment, contain a cholera outbreak and provide other life-saving support in Beira and surrounding areas, responders from the Ministry of Health and the Global Polio Eradication Initiative (GPEI) were already in the process of launching the first round of oral polio vaccination in districts along the cyclone’s path.

The districts targeted for polio vaccination most affected by the cyclone were Chinde and Luabo, home to 25 000 children under 5 years at risk for polio.

"The rains and flooding associated with the cyclone made physical access to villages very difficult,” said Dr Djamila Cabral, WHO Representative in Mozambique. “We are also concerned that with the displacement of people moving to safer ground polio could spread into other regions or even across borders.”

“We have identified 781 villages and neighbourhoods in 24 districts that have more than 5% of missed children, which means even in the areas we were able to deliver vaccine, the virus may still spread due to a significant proportion of unvaccinated children," said Dr Sadiq Abubakar Umar, WHO Incident Manager for the polio outbreak in Mozambique.

Despite the continued flooding, the Ministry of Health and GPEI partners plan to reach 100 000 children who missed their first dose in Luabo and the other 31 settlements across the districts of Pebane, Nicoadala, Namacurra, Inhassunge, Maganja da Costa, Mocuba and Mopeia.

Other districts in northern Zambézia will receive their second dose.

"Many of the areas we need to access will still be water logged during the second round. However, we will do everything we can to get through,” said Dr Sadiq.

In order to gain access, the Ministry of Health with support from WHO has hired boats to access difficult to reach areas.

The polio outbreak in Mozambique was detected in December 2018 after the virus paralyzed a child, and was also found in another healthy community contact.

To respond to this outbreak, the Ministry of Health organized vaccination rounds in 26 districts of the affected province targeting at least 1.6 million children for three doses of oral polio vaccine. The final round will take place between 24 and 28 April.

Completing three doses of polio vaccination in all target communities is key to stopping the outbreak and declaring Mozambique polio-free.

As polio is a highly infectious disease, which transmits rapidly, there is potential for the outbreak to spread to other children across the country, or even into neighbouring countries - unless swift action is taken.