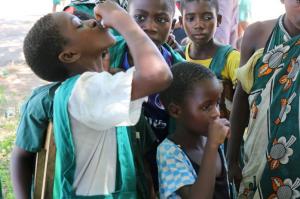 The Government of Malawi has conducted the first round of a vaccination drive to immunize 108 000 people against cholera, with support from the World Health Organization (WHO) and partners.

The first round took place from 19-23 February 2018 in Karonga district, which is situated at the northern tip of Malawi, bordering  Tanzania.

The immunization drive is part of efforts to control an ongoing cholera outbreak, and is using vaccines dispatched from the global stockpile oral cholera vaccine (OCV) funded and purchased by Gavi, the Vaccine Alliance. The campaign targeted areas in Karonga identified as hotspots (Ngara, Galimoto, Uliwa, Chilumba, Wegza, Fulirwa, Kaporo, and Songwe).

Many people  turned up at the 60 vaccination sites where health workers and volunteers provided the first vaccine dose to people over the age of 1 year. For maximum protection, two doses are recommended, and a second vaccination round is expected to take place in mid-March.

Gavi, through the WHO Country Office, has provided over US$ 100,000 for the implementation of the campaign.

Cholera is an acute diarrhoeal disease that can kill within hours if left untreated. Since the start of the current outbreak on 24 November 2017, the Ministry of Health reports that there have been there have been 541 suspected cases and 10 deaths. Karonga accounts for more than half of these cases. The factors fueling the epidemic are poor sanitation and a limited supply of water. Most cases are occurring in fishing communities around Lake Malawi, where people are highly mobile.

The campaign is part of larger control efforts by WHO and partners that include dedicated treatment centres, enhanced surveillance, provision of clean water and hygiene promotion.

In preparation for the administration of the vaccine the Ministry of Health, in collaboration with the World Health Organization and partners, trained 140 health workers and 140 volunteers. In addition, the District Executive Committee and traditional leaders were informed about the OCV campaign in the district. The traditional leaders in turn conducted community meetings and informed the people about the campaign.

The WHO Malawi country office is continuing to provide financial and technical assistance to the prevention and control of the outbreak which has affected 13 out of Malawi’s 28 districts.