WHO targets confined and returning displaced populations with immunization in Adamawa state. 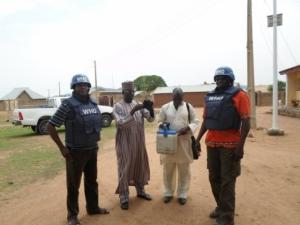 WHO targets confined and returning displaced populations with immunization in Adamawa state.

Abuja, 13 June 2015 - The World Health Organization (WHO) has coordinated immunization activities to support Adamawa State to immunize 68,495 under five children from 687 previously unreached settlements due to insecurity during the 6-9 June, 2015 sub-National Immunization Plus Days (sNIPDs), out of which, 646 were receiving oral polio vaccine (OPV) for the first time.

Regaining of territories previously occupied by the insurgents in the north eastern state of Adamawa by the Nigerian military has provided an opportunity to target children in previously confined areas and returning internally displaced persons (IDPs) who did not have access to medical care. These populations were hitherto threatened by the risk of outbreak of diseases, including vaccine preventable diseases such as poliomyelitis, measles, whooping cough, diphtheria and tuberculosis.

A mother displaced by insurgents, Rukayya Ayuba of Marraba settlement in Hong local government area (LGA) of Adamawa, noted that “since these insurgents attacked our settlements, we were deprived of all healthcare services including immunization. I am grateful for  the present arrangement that made it possible for my two children to be vaccinated”.

As part of the June 2015  sNIPDs preparations, the WHO state office mapped out the settlements inhabited by trapped populations and returning IDPs in Gombi, Hong, Madagali and Michika LGAs of Adamawa in order to implement comprehensive plans aimed at reaching internally displaced persons (IDPs) with immunizations and other health interventions. The sNIPDs were conducted across 27 political wards of the five LGAs despite the inherent security challenges.

The Executive Chairman, Adamawa State Primary Health Care Development Agency, Dr Abdullahi Belel who was concerned about the plight of the returning IDPs, acknowledged the support from  partners.

“We will continue to appreciate development partners for the kind of interventions provided with resources to achieve the goal of infectious disease elimination and eradication which is the only thing that keeps us motivated” Dr Belel stated.

He lauded the efforts of WHO  towards reaching the IDPs and returnees with vaccinations through the “hit- and –run” strategy which facilitates  vaccinating children during any short window of access but solicited for further support “to provide comprehensive package of primary healthcare services under one roof to them”.

The WHO team in Adamawa in conjunction with the state authorities will continue to conduct security risk assessments and plan for appropriate strategies to improve population immunity in the security compromised settlements.

For the records, WHO had initiated similar strategies to support states in other north-eastern states affected by insurgency to reach children with success.