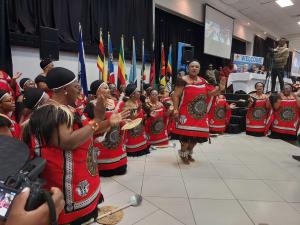 The Kingdom of Eswatini has once again hosted the East, Central, and Southern Africa College of Nursing (ECSACON) delegates for the 15th Biennial Scientific Conference and the 7th Quadrennial General Assembly.

The conference kicked off on a high note in Manzini on 13 September 2022, with delegates from 16 Eastern, Central, and Southern African countries including Uganda, South Africa, Tanzania, Rwanda, Zimbabwe, Namibia, Seychelles, and the hosts Eswatini, Botswana and Lesotho. The conference was last held in the Kingdom in August 1998, under the theme: ‘Improving Adolescent Health: Nurses and Midwives Working in Partnership with Communities’ and was officiated by His Majesty King Mswati III. This was one of the most memorable events where the country witnessed experts in nursing and midwifery science sharing scientific knowledge and best practices aimed at improving the health of our people.

The conference was officially opened by the World Health Organization (WHO) Director-General Dr. Tedros Ghebreyesus. Delivering a recorded message, he started by applauding all nurses and midwives in Southern, Eastern, and Central Africa for their steadfast commitment and courage during the COVID-19 pandemic. He also noted that there is a shortage of nurses and midwives globally, adding that a notable shortage is in the African region.

He mentioned that at the World Health Assembly (WHA), countries committed to strengthening support and safeguarding nurses, midwives, and other members of the healthcare workforce. Dr. Ghebreyesus highlighted that WHO has developed tools to support countries to follow through on this commitment including the global strategy for nursing and midwifery. He noted that, in this regard, there are encouraging signs of progress.

During the official opening, His Excellency the Honourable Acting Prime Minister of Eswatini Themba Masuku acknowledged the tremendous strides that African countries have made in addressing Adolescent Health issues which, because of HIV/AIDS, suffered a setback in the early 2000s until the discovery of Antiretroviral drugs which became a solution to the HIV burden. Masuku reiterated that the extraordinary commitment, selflessness, passion, nonpartisanship, and dedication demonstrated by nurses and midwives in addressing health challenges faced by communities and meeting Regional and Global targets cannot be over-emphasised.

He added that the Kingdom of Eswatini, just like other countries in the ECSA region, is committed to attaining Universal Health Coverage (UHC) and that nurses and midwives are essential to achieving (UHC) through Primary Health Care.

“You are often the first healthcare staff to interact with patients and sometimes the only health professional a patient will ever see. You provide care, support, and treatment for the sick, the injured, the dying and support their families and communities,” he said.

Masuku noted that the change in disease burden and emerging new diseases, such as COVID-19 have highlighted the need to strengthen how healthcare is delivered in the ECSA region and the world at large. He further stated that this also challenges the nursing and midwifery professions to embrace science and innovation as they constantly search for solutions for the new and complex challenges they face in the production of Nurses and Midwives (education), Leadership and Management, research as well as clinical practice.

The Acting PM also noted that the sub-Saharan Africa region has grown economically over the last two decades with an impressive growth of over 300% rate of total GDP since 2000. This growth, he noted,  has been accompanied by increases in health spending and significant gains in health outcomes with improvement in healthcare and health outcomes being directly supported by the region's economic growth. Despite the progress, Masuku added, the region still struggles with the highest disease burden in the world, including an emerging dual burden of communicable and non-communicable diseases. “This calls for investing in the Nursing and Midwifery professions if we are to attain Universal Health Coverage as well as Sustainable Development Goals (SDGs).

“In the same vein, the COVID-19 pandemic has profoundly affected nursing education and practice. This pandemic has exposed gaps and vulnerabilities of health systems and has presented important lessons for future preparedness,” he said, adding that the conference, therefore, comes at an opportune time to share lessons learned and learn from one another to contribute to attaining universal health coverage and the sustainable development goals. “We cannot succeed without each other, and we need to engage with respect and dignity whilst seeking guidance from the norms and principles that have evolved through time, experience, and collective wisdom”.

The conference was attended by over 400 nurses who took the time to observe a moment of silence for all nurses and midwives who lost their lives due to COVID-19. The delegates also re-took the pledge to practice the profession faithfully and to maintain and uphold the standard of the nursing profession.

ECSACON has for the past 32 years contributed to building capacity in nursing education, nursing regulation, and practice. It has contributed to several studies conducted including the State of the World Nursing report, and the World Midwifery report to name a few. 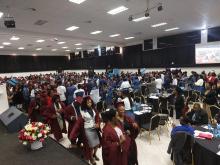