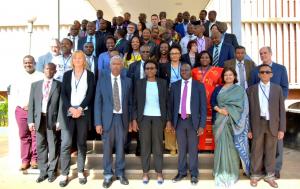 Kampala, 30th April 2019: - The Meeting on Strengthening Partnership for Improving Ebola Virus Disease (EVD) outbreak preparedness and readiness, opened in Kampala yesterday with a call to delegates to undertake frank discussions to unearth critical risk factors and challenges in the response and suggest feasible solutions to register concrete results.

“The increasing complexity of the current EVD outbreak in North Kivu and Ituri provinces in DRC presents a major risk of spreading of EVD within DRC and neighbouring countries. This outbreak is therefore not a problem of the DRC alone,” said Dr Jane Ruth Aceng Uganda’s Health Minter, while opening the meeting.

Organized under the theme “Outbreak Preparedness and Readiness” the meeting is intended to further engage partners for a better coordinated and comprehensive preparedness and response efforts to accelerate and achieve sustained EVD readiness.

Specifically, delegates from the nine countries attending the meetings will try to establish a common understanding by providing an overview of the strategic readiness, capacities and capabilities for EVD.  The delegates are sharing information between countries and key partners and providing updates on the key achievements, major challenges, lessons learned and best practices. At the end of the meeting, delegates will renew stakeholder’s commitment by developing a joint road map for sustained EVD preparedness.

As the EVD outbreak continues to escalate in the Democratic Republic (DRC), public health workers across the region are realizing that if the outbreak is not contained in DRC, it is probably a matter of time before it spreads to neighbouring countries.  The data and conditions on the ground seem to back up this realization.

As of 24th April 2019, a total of 1307 cases with 824 deaths had been confirmed in the densely populated Beni and Butebo provinces of DRC. The confirmed cases include 90 health workers of whom 33 have died indicating that there are enormous challenges with Infection Prevention and Control in health facilities.

Many deaths have also occurred in the communities which is a public health concern because that is confirmation of many contacts and sustained spread of the infection in communities.  Most worrying is the precarious security situation in the affected areas that has constrained the implementation of the response activities. According to a presentation from DRC, there are about 30 armed groups in the affected areas some of which have attacked Ebola Treatment Units (ETUs) in the recent past.

There are also pockets of resistance and hostility in some communities which has constrained the contribution of community engagement in the response.  In some instances, patients have escaped from ETUs and gone back to communities which has perpetuated the outbreak. In addition, the terrain and road network have also challenged community responders from reaching all affected areas.

Therefore, the countries neighbouring DRC have reason to worry. They share long porous borders with DRC compounded by high population movements.  It is a unique outbreak with complicated underlying factors which calls for sustained cross-border collaboration and international support.

“Your efforts and specifically your leadership are critical in ensuring that adequate capacities and capabilities are effectively implemented in your areas of jurisdiction and your countries, to timely prevent and contain EVD,”  noted Dr Matshidiso Moeti the WHO Regional Director for Africa in a speech read for her at the opening event.  She called for the urgent commitment of financial and human resources to facilitate smooth preparedness operations. “I urge the ministries of health here today to increase investment in epidemic preparedness in line with the national contingency plans,” she added.

From the country presentation, it is clear that all countries are in heightened response mode implementing many capacity building activities. Many have set up multi-sectoral committees that are leading the preparedness and response. In DRC for instance, this committee is led by the Prime Minister who convenes different government sectors to contribute to the response.

The delegates concurred that the battle against EVD in DRC will be won or lost in the community. They, thus, agreed on more action and investment in community engagement so as to build ownership and leadership by communities. It was also clear that countries have national and in some cases district operational readiness to deal with EVD. While this readiness is not sufficient, it should, however, be maintained and rolled out to the high-risk areas in all countries and to maintain the momentum and interest of all people.

At the end of the two-day meeting, delegates will come out with a roadmap that will further guide the implementation of the EVD readiness interventions in all the 10 countries.
As Dr Moeti noted: “We should continue to act together to overcome the gaps identified so that countries are prepared for the potential threat of Ebola!”