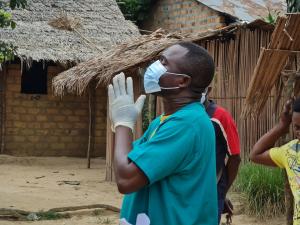 Brazzaville/Kampala/Kinshasa – The Democratic Republic of the Congo today declared the end of an Ebola outbreak that re-emerged six weeks ago in the country’s North Kivu Province. The announcement came as neighbouring Uganda races to curb an unrelated outbreak declared last week.

With only one case confirmed, the just-ended outbreak was one of the Democratic Republic of the Congo’s least catastrophic. A previous outbreak – the country’s 14th in which there were four confirmed cases and five deaths – was declared over on 4 July this year.

The Ebola outbreaks in the Democratic Republic of the Congo have been caused by the Zaire ebolavirus – one of the six species of the Ebola genus. Uganda is fighting a fast-evolving outbreak of Sudan ebolavirus, with 36 cases (18 confirmed and 18 probable) and 23 deaths reported as of the 25 September.

In the Democratic Republic of the Congo, improving Ebola outbreak readiness and response is paying off. Only a few days after the outbreak in North Kivu was declared, the health authorities rolled out a vaccination drive using the ring strategy. More than 500 people were vaccinated including 350 contacts, contacts of contacts and frontline workers. Nearly all the 182 people who had come into contact with the initial case were monitored over 21 days and cleared once confirmed as not being at high-risk.

Analyses of samples taken from the confirmed case showed that the outbreak was genetically linked to the 2018–2020 Ebola outbreak in North Kivu and Ituri provinces—the country’s longest and largest. Although the current outbreak in North Kivu has been declared over, health authorities are maintaining surveillance measures and remain ready to respond to any flare-ups.

“The Democratic Republic of the Congo has built up impressive expertise in controlling the virus and we can marshal the lessons learnt to beat back the Ebola outbreak in Uganda,” said Dr Matshidiso Moeti, World Health Organization (WHO) Regional Director for Africa. “While an effective vaccine is not yet available for the Sudan ebolavirus, this is just one tool. We can and have brought Ebola to heel with robust contact tracing, detection, isolation of cases and good supportive care.”

In Uganda, the Sudan ebolavirus outbreak has now affected three districts: Mubende, Kyegegwa and Kassanda across 120 kilometres. To date, 399 contacts have been identified and are being monitored as the search continues to identify other people who may be at-risk. Uganda has strong testing capacity for Ebola, with 5000 tests currently available for use.

There are 30 people undergoing care—13 of whom are confirmed to have Ebola and 17 of whom are suspected to have contracted the disease. While there is no specific treatment for Sudan ebolavirus, those who are sick are receiving supportive care, which significantly improves their prognosis. An isolation unit has been set up in the Mubende Regional Referral Hospital and preparations are underway for an additional Ebola Treatment Unit. WHO has also deployed three viral haemorrhagic fever kits with medical supplies, medicines and personal protective equipment. More kits will be deployed based on need.

WHO is supporting Uganda to improve readiness in health districts which have not reported any Ebola cases by building on previous preparedness efforts and providing refresher trainings for clinicians on surveillance, case detection and management. The Organization is strengthening infection prevention and control in health facilities and is supporting simulation exercises in high-risk districts.

Additionally, WHO is assisting rapid response teams in neighbouring countries to strengthen case investigation, contact tracing and working with communities, as well as prepositioning critical medical equipment and supplies including personal protective equipment in high-risk countries.

Through its Contingency Fund for Emergencies, WHO is providing US$ 500 000 to support Uganda’s Ebola control efforts and another US$ 300 000 from its preparedness programme to support readiness activities in the neighbouring countries.