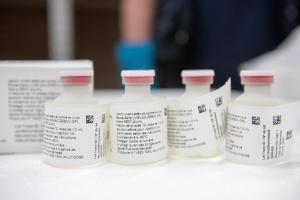 Freetown – While the 2014–2016 deadly Ebola outbreak in West Africa devastated lives and wrecked health services, it also offered pivotal lessons in outbreak control by stoking swift and more effective response as well as driving progress in vaccines and therapeutics.

When the virus re-erupted in Guinea in mid-February 2021, neighbouring countries were quick to ramp up readiness to tackle potential cross-border infection. The outbreak in Guinea, which re-emerged in the same region as the 2014–2016 outbreak, was declared over on 19 June.

In support of countries neighbouring Guinea, the World Health Organization (WHO) swiftly undertook a risk assessment and rated the risk of spread in the region as high. WHO further helped governments institute actions immediately to prevent spill-over of the disease.

In readiness for a potential cross-border infection, Guinea’s six neighbours stepped up surveillance and screening at border crossing points and robust community engagement. Rapid response teams were deployed to border areas to strengthen districts’ readiness using pillar approach. Capacities for testing and treatment facilities were scaled up as well as working with communities to take full ownership and rally around public health responses.

In Sierra Leone, the health authorities rolled out preventive Ebola vaccination as a priority action of its Ebola Outbreak Preparedness and Contingency Plan. The vaccination targeted 16 000 people at high risk such as frontline health workers and communities in border areas.

“Apart from other critical public health measures for preventing EVD infection, the Ebola vaccine is a powerful public health tool at our disposal that can protect the health care workers and other frontline service providers who are at high risk of exposure,” says Dr Charles Njuguna, Health Security and Emergencies lead at WHO in Sierra Leone.

In addition to health workers, traditional healers, taxi motorbike riders were among the high-risk population groups being targeted in the vaccination for which the doses were mobilized by WHO.

“I am a health worker and every day at work we interact with people from different backgrounds and localities even before fully knowing their disease conditions,” says Salome Kanjama, who received the Ebola vaccination. “It helped boost my confidence and safety against the disease even as we offer services to others. There are families in Sierra Leone that spend the day in Guinea and return in the evening and vice versa.”

The latest outbreak in Guinea was contained within the country, where 23 cases, 11 survivors and 12 deaths were reported. Guinean authorities, with the help of WHO and partner organizations, promptly launched response, with vaccinations starting just nine days into the outbreak.

“The government has been impressively proactive and determined in mobilizing partners support in building structures and capacities for prevention, preparedness and readiness for any potential outbreak, and that includes deployment of the vaccine on compassionate grounds,” says Dr Steven Velabo Shongwe, WHO Representative in Sierra Leone.

“Even though the outbreak is now over in Guinea, we continue to support the health authorities in the subregion through cross-border collaboration and partnerships to sustain enhanced public health surveillance for early detection of any resurgence of Ebola as well as continue with the EVD vaccination exercise in Sierra Leone,” explains Dr Shongwe.