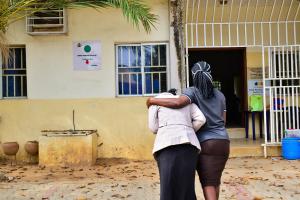 Abuja, 27 October, 2018 - There is now a renewed determination in Nigeria to save thousands of women who needlessly lose their lives every year from breast cancer. The Federal Ministry of Health (FMoH) working with a number of partners including World Health Organization (WHO), is intensifying campaign to make cancer treatment services available and increase awareness towards increased access.

According to Dr David Atuwo, the National Coordinator of the National Cancer Control Programme, the FMoH recently increased the provision of infrastructure for diagnosis, chemotherapy, surgery and radiotherapy for breast and other cancers. By December 2018, we expect the two radiotherapy machines to be working optimally at the National Hospital, Abuja. In addition, Lagos University Teaching Hospital in Lagos will have top of the line Radiotherapy facilities to be commissioned in January 2019”.

Dr Atuwo also disclosed that other tertiary facilities now have mammography and other facilities to detect and diagnose breast cancer at its early stages. “Chemotherapy is also being offered in nearly all university teaching hospitals and Federal Medical Centres in Nigeria. Unfortunately, many Nigerian women do not know what to do when they discover the early symptoms of breast cancer, and end up in facilities that cannot offer the required care,” says Dr Atuwo.

Further work is currently ongoing in University Teaching Hospitals of Zaria and Ibadan to provide similar services in the coming months. Eight other tertiary hospitals in total have been designated as centres of excellence in cancer care and are currently benefitting from a Federal intervention fund for Radiotherapy services across the country.

Call for increased public awareness and education
With records indicating continued steady rise in breast cancer cases claiming lives of thousands of Nigerian women every year, an awareness campaign that will leave no stone unturned, is being mounted by a ‘partnership for control of cancer’ to reach people across the country and persuade them to take personal action against the disease (Source).

“WHO is actively supporting this campaign by working with the government on a comprehensive approach to cancer control that span from promotion of health, through to prevention, early detection, diagnosis, treatment and palliative care”, Dr Wondimagegnehu Alemu, the WHO Country Representative in Nigeria said.

He stressed the importance of “cancer prevention undertaken through addressing cancer risk behavioural and lifestyle causes including tobacco use, obesity, physical inactivity and alcohol use. WHO supported Government to develop the Nigerian 2018-2023 NCD Action plan which is squarely focused on these risk factors which are currently on the rise”. Dr Alemu further emphasized on the need for a whole-of-government and whole-of-society approach to tackling the rising challenges of Non-communicable diseases including breast cancer.

A patient’s battle with breast cancer
Uchechi Nwosu, 34-year-old Abuja-based civil servant, noticed a bloody discharge from her left breast in July 2016. “I went to the hospital immediately and was requested to do a series of tests including biopsy. I was diagnosed with stage 2 cancer of the breast in December 2016 and went through 4 cycles of chemotherapy, then lumpectomy surgery in March 2017, another 4 cycles of chemotherapy which ended in July 2017 and then Radiotherapy from August to September 2017.”

Since Uchechi was diagnosed with human epidermal growth factor receptor 2 (HER 2+), an aggressive type of breast cancer, she was placed on Harceptin, a targeted breast cancer therapy that is to be taken for at least one year. Uchechi received the Harceptin medications from May 2017 to April 2018.

“In January 2017, Harceptin was sold in Nigeria for N750,000 (approximately US$2,000) per bottle and I was told I will need 23 bottles of it. By April 2017, the price reduced to N560,000. Fortunately, with the help of friends and family, I was able to pay for the treatment,” Uchechi who has now recovered fully and lives a healthier lifestyle said.

Risk factors
Several factors including genetic, environmental, metabolic and behavioural factors contribute to the ongoing rise of breast cancer cases. As the world observes breast cancer awareness month every October, it is important to note that breast cancer is now ranked number 1 both by site (22.7%) and by the cause of death in women (18.6%) in Nigeria (Source).

“Women can reduce their risk of breast cancer through conducting monthly self-breast examination, avoiding tobacco, breastfeeding for at least 1 year and through regular exercise,” she recommended. In addition, early diagnosis and prompt treatment will lead to the overall reduction in breast cancer related morbidity and deaths.