From high burden to high impact: getting back on track to end malaria 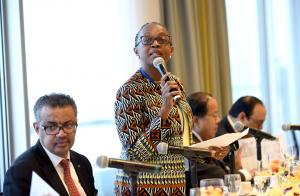 From high burden to high impact: getting back on track to end malaria

Ten countries in sub-Saharan Africa (Burkina Faso, Cameroon, Democratic Republic of the Congo, Ghana, Mali, Mozambique, Niger, Nigeria, Uganda and United Republic of Tanzania) and India account for approximately 70% of global malaria cases and deaths. Strengthened political commitment, financing and programmatic action are urgently needed to get malaria responses back on track, especially in countries that carry the heaviest burden of disease.

This week, leaders from some of the countries hardest hit by malaria gathered on the sidelines of the 73rd United Nations General Assembly to share their views on challenges and opportunities in the fight against malaria. They were joined by senior government officials from Thailand and the Solomon Islands, as well as by heads of partner and donor agencies.

This photo slideshow includes quotes from all key speakers. It was developed by WHO in collaboration with the United Nations Foundation and the RBM Partnership to End Malaria.

Co-sponsors of the high-level roundtable

The event was moderated by James Chau.

Click image to enlarge
Related Links
From high burden to high impact: getting back on track to end malaria