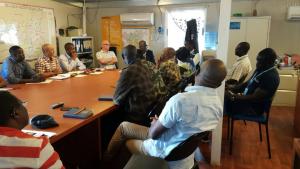 Juba, 25 January 2018 – To reduce threats posed by zoonotic diseases due to a wide range of diseases – including Rift Valley Fever, Crimean- Congo Hemorrhagic Fever, Avian Influenza, Yellow Fever, as well as Lassa Fever, Ebola, and Marburg, WHO is promoting the one-health approach to ensure that the combined resources and expertise are effectively used.

Zoonotic diseases such as Rift Valley Fever occur as a result of the often-complex interactions that exist at the animal-human-environment interface. The most obvious consequence of this complexity is the need for the health sector to partner with institutions in relevant sectors like the Ministries of Livestock, Environment, Wildlife, Disaster Preparedness and response, and other sectors appropriate to the context.

To respond to the suspected viral haemorrhagic fever (VHF) outbreak in Thonabutkok village, Yirol East County, former Lakes State on 28 December 2017, multi-sectoral response has been launched by the Ministry of Health, Ministry of Livestock and Fisheries, WHO and other experts from the human and animal health to conduct an in-depth joint outbreak investigations. A multi-sectoral taskforce has been established to coordinate the investigation and response activities. The sectors represented on the taskforce include the Ministries of Health, Livestock and Fisheries, Environment, Wildlife, Information, Defense, and Trade. These are supported by partners including WHO, UNICEF, OIE, FAO, MSF, United States Agency for International Development (USAID), EU Humanitarian Aid and operational health cluster partners.

Dr Joseph Wamala, an Epidemiologist at WHO South Sudan underscored the need to establish integrated animal-human early warning systems for prompt detection and reporting of emerging zoonotic diseases. The findings from the preliminary investigations showed that abortions in small animals (sheep and goats) pre-dated the human cases by two months. “This represents a missed opportunity for timely initiation of disease control at the animal-human interface,” said Dr Wamala.

The action plan developed in response to the current event therefore prioritizes enhancing community surveillance by training both the community animal health workers (CAHW) and community health workers (CHW) to detect and promptly report events that herald the onset of zoonotic disease outbreaks. So far, 60 CAHW and CHW were jointly trained in Yirol East in all aspects of both human and animal aspects of viral hemorrhagic fevers with special focus on Rift Valley Fever.

Improved coordination among key ministries (health, livestock, fisheries, wildlife, environment, disaster response, and partners) guided by the one-health approach is necessary to match the responses to the disease ecology, says Mr Evans Liyosi, WHO Representative a.i. for South Sudan. In pursuit of these goals, WHO supported the roll-out and implementation of a multi-sectoral response to urgently address the suspected viral haemorrhagic fever (VHF) outbreak in Thonabutkok village, Yirol East County.