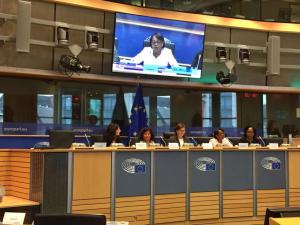 Brussels, 21 November, 2017 – The World Health Organization’s Director for the Africa Regional Office, Dr Matshidiso Moeti, has said that significant progress has been made in various health aspects in the last fifteen years, in the African Region, but has cautioned against complacency otherwise achievements made will be rolled back.

Addressing members of the Environment, Public Health and Food Safety Committee (ENVI) of the European Parliament today in Brussels, Dr Moeti noted that the European Parliament is an important, strategic partner for prosperity and stability in the two continents. She lauded the new priorities for EU-Africa cooperation agreed by the EU Commission and stressed that as African countries strive to ensure healthy lives and promote well-being strong health systems and sustainable investments in health are essential.

Dr Moeti’s address is part of the EU’s ”African Week” which runs from 20 to 24 of November 2017 and a precursor to the Africa-EU summit of Heads of States and Government which will take place take place in Abidjan, Ivory Coast at the end of November under the central theme "Investing in youth for a sustainable future.

The Regional Director highlighted some of the gains as a result of health investments over the years including decreased child mortality in several countries, reduced incidence of HIV and Malaria among others. She however cautioned that the burden of communicable diseases and outbreaks in the African Region remains high and called for firm action to curb them as failure to do so will jeopardize hopes of achieving national, regional goals and the SDGs.

“The 2030 Agenda for Sustainable Development (SDG) has ignited new enthusiasm for health in Africa. With the African region on the cusp of eliminating several diseases, rising political will and youthful population, there are massive opportunities for further progress and improvements. To sustain the gains from previous Millennium Development Goals, focus needs to be placed on multi-sectoral and a people-centered approach to ensure that no one is left behind.” said Dr Moeti.

In her remarks, the Ms Adina-Ioana Vălean, Chair of the European Parliament’s Environment Committee underscored the importance of responsible investment and trade, respecting international health, safety, labour and environmental standards. She drew attention to the critical role of health and environment in sustainable socio-economic development.

“The EU is an enabler of health security and health systems strengthening in Africa. Over the years, our collaboration is making an impact. I am confident that strong collaboration between our institutions will contribute immensely towards improving the health of Africans”, she said.

The Environment, Public Health and Food Safety Committee (ENVI) of the European Parliament is one of the largest of the 22 Standing Committees of the Parliament with a broad agenda including topics on Climate Action, and Environment, Health and Consumers.

The EU-Africa summit occurs only every three years in Africa and Europe alternatively and are a critical opportunity to build a stronger political relationship between Africa and Europe. They also place “health for all” high on the agenda of the Joint Strategy, in line the Sustainable Development Goals.

Dr Matshidiso Moeti from Botswana is the first woman WHO Regional Director for Africa and a public health veteran. At the height of the HIV/AIDS epidemic, Dr Moeti led the WHO Regional Office for Africa's efforts on treatment scale-up in the context of the ‘3 by 5’ initiative and established a regional HIV laboratory network resulting in a significant increase in the number of HIV-positive individuals accessing antiretroviral therapy in the Region.

She also successfully spearheaded the development of WHO Regional Strategies for public health priority areas, including communicable and non-communicable diseases, immunization, maternal and child health, and the strengthening of health systems.