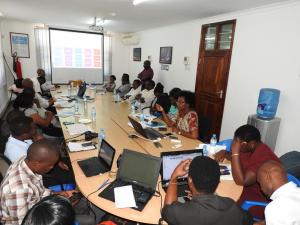 Dar es Salaam, 13-19 November 2017 - This year, the United Republic of Tanzania joined the world to commemorate World Antibiotics Awareness Week (WAAW) aimed to raise awareness of the urgent need to act on antibiotic resistance and the steps to be taken. The theme is “Seek advice from a qualified health professional before taking antibiotics”.

Antibiotics are medicines used to prevent and treat bacterial infections in humans and animals.

Antibiotics are in danger of losing their effectiveness due to over-prescribing and dispensing by health care professionals, misuse by patients such as not following the advice of healthcare professionals, overuse in farming and animal husbandry, poor infection control, and a lack of new antibiotics. Examples of misuse include taking antibiotics for viral infections like cold and flu, and using them as animal growth promoters on farms or in aquaculture.

Antibiotic resistance occurs when bacteria (not humans or animals) become resistant to the active ingredients in these medicines. Antibiotic resistant bacteria may infect humans and animals, making the infections they cause harder to treat, contributing to prolonged, more expensive treatments, longer hospital stays, lost productivity and increased mortality.

As part of the commemoration, WHO in collaboration with the Food and Agriculture Organization of the United Nations (FAO), Ministry of Health, Community Development, Gender, Elderly and Children (MOHCDGEC) and Ministry of Livestock, and Fisheries Development participated in a series of awareness raising activities calling for responsible use of antibiotics in humans and animals to reduce the emergence of antibiotic resistance.

Media involvement has been crucial in the success of the commemoration. A number of local TV, Radio programmes and newspaper articles were produced by different media houses to raise awareness on the dangers of misuse of antibiotics.

A one day media briefing was organized on the 14th November 2017 with the purpose to ensure proper understanding and awareness among the media on the use of antimicrobial agents and resistance. The training was attended by journalists from local media channels (TV, Radio and print media). Among topics covered included how to stop antibiotic resistance in humans, animals and the environment and the roles of the individual, policy makers, regulators and the public in general in combating antimicrobial resistance (AMR).

To end the WAAW 2017, the Multi-stakeholders Coordination Committee on AMR had an adhoc meeting on Friday 17th November 2017 at the New Africa Hotel to discuss among other things the progress of the celebrations of the WAAW in the country this year and plan for the next years ‘celebrations. The committee was informed that an awareness raising campaign has been done throughout the country using printed materials, local radios, blogs and television. Pharmacy students through their association (Tanzania Pharmacy Students Association) as well as some secondary schools also participated in raising awareness on AMR in schools. 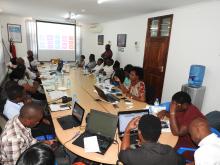