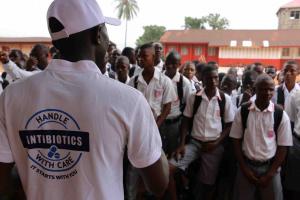 FREETOWN, November 17 2017 - Staff from the Ministry of Health and Sanitation and student pharmacists engaged thousands of children at schools this week around Western Area Urban and Rural on safe antibiotic use, during commemorations of World Antibiotic Awareness Week. Other teams including those in the districts also engaged health workers, pharmacists and those working in the animal sector to promote safe and responsible use and dispensing of antibiotics among these groups, as well as adequate infection prevention and control in healthcare settings.

World Antibiotic Awareness Week runs every year from 13th to 19th November and the theme for this year is “Seek advice from a qualified health professional before taking antibiotics”.

“The single most important message for the public to know is to only ever take antibiotics after consulting with a qualified health worker, which is vital to protect their health and the health of other people,” said Dr Wilshire Johnson, Registrar of the Pharmacy Board of Sierra Leone. “Overuse and misuse of antibiotics is contributing to an alarming rise in antibiotic resistance worldwide, which is making it more difficult, even impossible, to treat a growing number of infections.”

Antibiotic resistance happens when bacteria change so that antibiotics no longer work against them, and this has been documented in the treatment of a wide range of conditions from tuberculosis to gonorrhoea, urinary tract infections, pneumonia and many more.

“A resistant infection may kill the individual affected, can spread to other people, and imposes huge costs to individuals and society,” explains Dr. Ekaete Tobin, Laboratory Specialist at the World Health Organization (WHO) in Sierra Leone. “Without urgent actions from the public, health workers, policy makers, the health and agriculture sectors and the scientific community, we risk losing our last line of defence against many bacterial infections, which would be catastrophic for public health,” she added.

The Ministry of Health and Sanitation, Ministry of Agriculture, Forestry and Food Security, Environmental Protection Agency, Food and Agricultural Organization (F.A.O) and WHO are urging the public to take a number of actions to help prevent antibiotic resistance, by asking people to:

With support from partners, the Government of Sierra Leone is working to develop a dedicated plan to prevent and tackle antibiotic resistance, which outlines essential roles for different stakeholders to reduce risks of its spread.

Factcheck with Dr Tobin from WHO Sierra Leone

Antibiotics are medicines that help stop infections caused by bacteria. They do this by killing the bacteria or restricting their growth. Antibiotics include medicines such as penicillin (e.g. ampicillin, amoxicillin, and benzylpenicillin); doxycycline; gentamicin; and fluoroquinolones (such as ciprofloxacin), and can be given in different forms – e.g. tablets, ointments, drops or sprays or liquid medicines. Antibiotics don’t work for viruses like common colds and flu or period pains, or against most coughs and sore throats.

What is antibiotic resistance and why is it a concern?

Antibiotic resistance happens when bacteria change (“evolve”) after they have been exposed to antibiotics. Microorganisms that develop resistance are sometimes referred to as “superbugs”. As a result, the medicines become ineffective and potentially fatal infections can persist in the body, with increased risk of spread to other people.

Antibiotic resistance occurs naturally over time, usually through genetic changes. However, the misuse and overuse of antimicrobials is accelerating this process. In many places, antibiotics are overused in people and animals: for instance, when they are taken by people with viral infections like colds and flu, or when they are given as growth promoters in animals. Poor infection control, inadequate sanitary conditions and inappropriate food-handling can also encourage the spread of resistant bacteria.

Where does antibiotic resistance exist?

Antibiotic resistance is present in every country and has been documented in treatment of pneumonia; urinary tract infections; gonorrhoea, tuberculosis, and many other infections. Resistance to first-line drugs to treat infections caused by Staphlylococcus aureus—a common cause of severe infections in health facilities and the community—is widespread globally, known as “MRSA”, and significantly increases risks of death for those affected. Multi drug-resistant tuberculosis (MDR-TB), a form of tuberculosis that is resistant to at least two of the main anti-TB drugs, has now been identified in 105 countries including Sierra Leone.